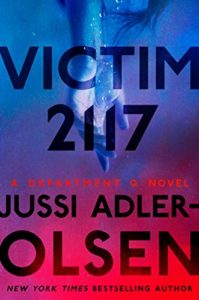 A body on a beach in Cyprus is registered as the 2117th death of a refugee in the Mediterranean Sea. The cause of death, however, is not drowning but murder. Detective Carl Mørck from the Department Q in Copenhagen becomes involved because his assistant Assad recognizes the dead woman.

This is the 8th entry in the Department Q series and the first one I wish I had skipped. The previous books were operating on a much smaller scale in that they were concerned with events in Denmark and were more or less about regular murder investigations, although Adler-Olsen has always been good at equipping his stories with some unconventional aspects. In this one, on the other hand, he suddenly includes seemingly every available hot-button topic, like refugees that try to come to Europe on non-seaworthy boats and the controversial handling of this issue by European governments, islamist terrorism, and, in a subplot, violent computer games and their possible influence on young men who are socially isolated and could become domestic terrorists. In flashbacks, the Iraq War and Abu Ghraib also play a role.

To sum it up, it is too much. The plot is hopelessly convoluted, there are too many storylines, too much skipping around between various characters and places, and, worst of all, all this accomplishes is to make it boring. The second half especially dragged interminably. I am also not a fan of using the refugee crisis as a central plot point like that, especially by linking it to terrorist attacks. In the beginning, there is some faint criticism of the hypocrisy and inaction surrounding the topic, but all nuance gets abandoned rather quickly in favour of more action and higher personal stakes for the main characters, instead of keeping an eye on the bigger picture.

Sadly, this installment of the series moves away from practically everything that made it interesting in the first place, and especially the dynamics between the members of Department Q and their complicated private lives. There is very little banter and even overall interaction between the four. Assad’s backstory was long-awaited but now that it finally has been revealed I wish that it had been kept secret. There is also no mystery, as it is pretty much a straight-up political thriller with an ending that sadly lacks all subtlety or finesse.

In conclusion, I cannot recommend this to anyone. If you like political thrillers, there are much better ones out there. If you like murder mysteries, this is not one. And if you are a fan of the Department Q series, I can only advise that you reread one of the previous books instead.