> FAQ Home
> Genre: Mystery > “There’s so much pain everywhere, and we just close our eyes to it. The truth is we’re all scared. We’re terrified of each other.” 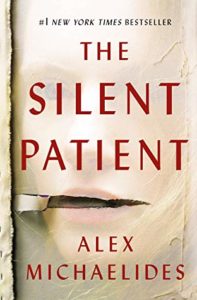 I am simultaneously satisfied and disappointed.

I feel like you really only get one thriller in your lifetime that really knocks your socks off your feet, leaving your mouth hanging open like sort of fish creature, only able to say, “WHAT? What just happened???” And I have more than used up my quota of those types of books. I think Gone Girl was my first. I think it was a lot of people’s. And since Gone Girl there have been so, so many psychological thrillers with unstable women at their cores, often ones with mental health issues right alongside substance abuse, etc. After a while, they all just feel the same. But I really like this one!

While The Silent Patient didn’t really surprise me, it felt more genuine than so many of the other books in this genre that I’ve read. I felt there was a real, human core to it that sticks to your ribs even after you have guessed the twist ending (or rather, guessed it and then dismissed that guess as wrong because of tricksiness on behalf of the author), or after it’s been revealed, if you manage to hold out that long. I feel like the real test of these types of books is if they’re still interesting to you on a human level, after you already know what’s happened. Can you re-read this? And I think with this one, you can.

Michaelides says he wrote the book “to give myself pleasure,” which makes me so happy. I feel like that just supports my feeling about the book. And I really like the way that he uses his silent murderer right alongside his unreliable narrator. (No spoilers in this review so it’s coming out vague.)

The disappointment comes in because I think as readers, we all want those reading experiences where books don’t just truly surprise us, but do it in such a way that it feel inevitable. That wasn’t really this book, but I enjoyed it anyway, and if you’re a fan of psychological thrillers, you should check it out.