> FAQ Home
> Genre: Fantasy > “You’re in a world full of color and you want to see it in black and white.” 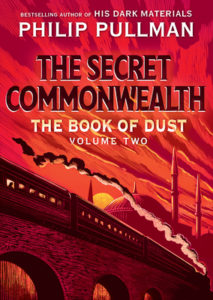 Firstly, this was very compelling. I haven’t spent really any time wondering what happened to Lyra since we last left her, if I’m being honest (I liked that nebulous hopefulness at the end of Amber Spyglass that let you assume she would do the work of building the Republic of Heaven on earth, that she would eventually find love that would let her move on from Will, etc.). But as soon as she and Pan appeared on the page, I realized that I had missed them and this world, and that I did want to know what happened. I even missed Malcolm and Alice and Hannah Relf, and I only met them for the first time two months ago.

It makes sense to me that Lyra would have issues coming home from her adventures up North and in other universes. She experienced severe trauma, if nothing else, among which is also the loss of many people she loved (to death or otherwise), and events that could significantly alter her perception of the universe. It makes sense to me that she would be having a hard time as a young adult. It also makes sense to me that her and her allies’ victories in HDM didn’t necessarily mean that when she came home, anything about the Magisterium or their lives would have really been altered. Hers were metaphysical victories in a place far away. Back in her universe, a nascent theocracy is still in power. And they haven’t let up on their obsession with Dust.

With that said, I feel like despite how compelled I was by this book, I don’t really know how I feel about it, because absolutely nothing here has any resolution. This book does not stand on its own. This is just the first part of a story that escalates and will presumably conclude in the third book, and who knows how long we will have to wait for that (two years if we’re lucky). So many things are introduced and then left up in the air:

SPOILERS * Lyra’s rift with Pantalaimon, which actually results in him leaving her 1/3 of the way through the book. I found this fascinating and actually wish the book would have focused more on daemon lore, and what it means when a person and their daemon are at odds. Pullman takes us all the way up to where they are about to reunite, but we don’t get to see it. We also don’t really get emotional resolution on Lyra’s journey to “reclaim her imagination” (which is very nebulous to begin with).
* Anything to do with the roses.
* Lyra’s uncle being the new President/ruler of the Magisterium.
* She only makes it halfway on her journey to the place where the roses are grown.
* Malcom doesn’t really have an arc here, but it’s obvious Pullman is setting them up for a romance. (It was obvious in La Belle Sauvage.) Pullman has never been great with romance set-up. We get no build up or context for Malcolm’s feelings, or how they’ve changed over the years, and though I don’t personally see it this way, I get why people are seeing him as sort of creepy. END SPOILERS

All in all, I’m waiting to see how all of this is resolved before I can really judge the book (though I do think it’s not ideal leaving a book, especially one as large as this one, so up in the air). Worth noting, so much is here that I have no idea how all of it actually can be resolved in one book. I didn’t even bring up like ten other things.

[3.5 stars, rounded up, but might round down depending on how book three goes]