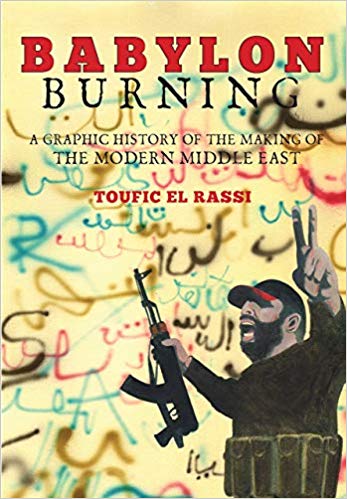 Babylon Burning: A Graphic History of the Making of the Modern Middle East is a graphic novel that is not for the casual reader. It is not for anyone 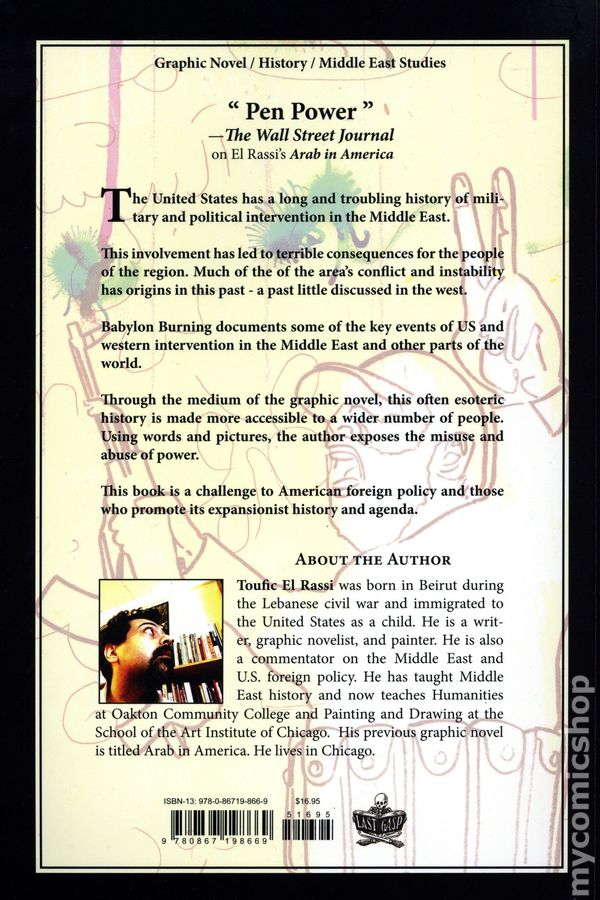 probably under 14 (in fact I would probably not recommend for anyone under 16-17 in some cases). It is not a book that you will find a happy, fluffy, Rah-Rah-America-is-Great mentality. Toufic El Rassi even comes out and says he never said he was not going to be biased. Arab in America (from 2008) started his exploring the issue of being Arab and Muslim in America and Baghdad Burning shows how we as a nation and world power most likely got there.

You will love this book or hate it. There is no in between. There are hard truths told. However, it does cater to if you are already prone to think that America and the West are pretty much solely responsible for the chaos of the Middle East, it will reinforce that belief. You might not like how the US and other powers used the Middle East for power, oil, and to have domination by the US, but you will see that it did happen. And how it is not just in the Middle East the US imposed themselves into the political world. You see how from the 1940s to 1970s the policies were created that would create a world that has terrorism, how the word is overused and has lack of understanding when using it. And not to mention how it and other policies are used as scare tactics to allow the leaders to keep doing what they do. And how both sides use polices to get what they want. You see how Britain and America rose and fell. You see how the question, “Why do they hate us?” Is not the real question. And you will see how those policies lead to Obama becoming president, what he did or did not do to help the situation and finally how this all lead to Trump becoming president.

These are not pretty images to portray and the author/illustrator does not show them in a pretty manner. The illustrations are unpleasant to the eye. They are black and white and are almost unfinished looking. But had they been “neat and colorful realistic images” the point most likely would be missed. The author also will put himself as a character to make points. He does not shy away from using any tool he has to get his message out there.

The understatement of the year is that this is not for everyone. It is however, a possible good companion to Persepolis. While tone and the stories vary, both show the Middle East in another light by showing their story from another point of view. Both narrators talk to the reader, but Babylon Burning has a more casual tone and is a lot more direct. And while this book seems like you are sitting down and just having a friendly conversation, it hits hard and does not apologize.

I am giving this a five, not because I loved it, but because I respect what I learned from it.