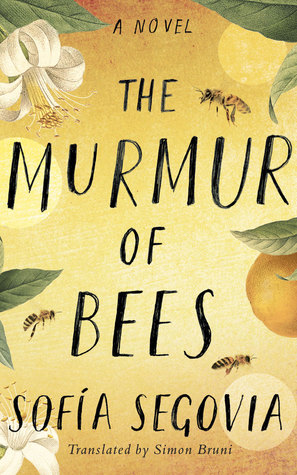 Bingo Update: This is for my History/Schmistory square. The book is, according to the publisher, “set against the backdrop of the Mexican Revolution and the devastating influenza of 1918.” I learned SO MUCH about Mexican history reading this book, even if it is a work of fiction.

Every now and then a monolith that should be seen as evil does something good, even Amazon (who we appreciate for our buyhole, obviously). Amazon sent out a list of books they were offering for free for World Book Day, and all of them were by non-US authors. I picked up a number of them, although this is the only one I’ve read so far. I’m glad that Amazon brought this book to my attention – I had never heard of it and probably never would have read it if it hadn’t been for that promotion. I deeply appreciate being given the chance to broaden my literary horizons by reading a non-English work written by someone from a cultural experience completely different from my own.

The Murmur of Bees centers around the Morales family, living in the city of Linares, a small Mexican village. The book begins with old Nana Reja discovering a small baby boy, later named Simonopio, who has been abandoned under a bridge. The infant is disfigured and covered entirely in bees, but Nana knows he should be saved. She brings him home to Francisco and Beatriz, who choose to raise him as their own, despite the opposition of the superstitious locals who mistrust a child they see as kissed by the devil. However, Simonopio isn’t the Candyman here – he speaks to the bees and they guide and protect him. He also has visions of things that have not happened yet, which he utilizes, along with his bees, to attempt to defend his family.

To say too much more of the plot would both spoil it, and miss the point. The language of the story is more lovely than the story itself, and enormous credit must be given to Simon Bruni, who seems to have kept Sophia Segovia’s prose as musical and illustrative as he possibly could. The very real events of the revolution and the plague, of all the hardships borne by the people of Linares, still have a poetic quality about them and the more magical elements manage to feel grounded. It strikes a really lovely balance.

That’s not to say that this doesn’t get very dark. This is not a book for the faint of heart, as Sophia does not shy away from the grim realities of conflict and disease, nor of hatred of a very human variety. There is violence done that is hard to stomach, but none of it is done for shock, but rather in honest service to the story or characters involved. That doesn’t make it easier to read, but it doesn’t make me angry at the book or its author.

This book is well worth your time, especially if you want to learn more about Mexican history through a fictional lens, or merely read something told from a perspective completely different from your own (if you are, like me, a white woman from the US; obviously, ymmv).