Coming Soon! Future is Queer #CannonBookClub June 19-20. Everyone is Welcome!

> FAQ Home
> Genre: Fiction > All the Elements of Classic King 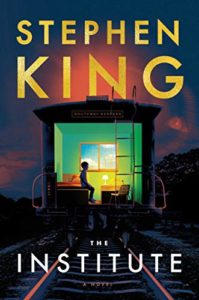 The latest King novel has a very classic King feel given its focus on extraordinary children and evil agencies.  First, though, the novel introduces Tim Jamieson, a former Florida police officer, who is on his way to New York to start fresh with a security job.  He decides to take the scenic route, and ends up on an extended pit stop in a small town in South Carolina. He takes on a job as the night knocker for the small police department, and gets to know the local quirky personalities.  After this initial introduction of King’s standard “good guy” archetype, the novel moves onto the meat of the narrative.

Luke Ellis is a genius.  He is only 12 years old and has been nominally accepted to attend MIT and Emerson simultaneously to study engineering and English.  In addition, he is a genius that is actually well-rounded, able to interact socially and participate in sports enough to not get picked last.  Some of this is something Luke works at to make his life more normal, but his parents are very aware of how unique their son is.  The fact he appears to display signs of very minor telekinesis is not even noteworthy given everything else going on.  When a child can understand postgraduate level work in two weeks, the fact that sometimes a door slams on its own when he is agitated is the least notable thing about him.

Unfortunately, that’s not the way the Institute sees it.  They need gifted children, and it’s been much harder to find them over the last few years, meaning that children like Luke that would have never even been on their radar are now fair game (at no point do they consider that maybe there are fewer of them because they are kidnapping and using them up before they can reproduce but at least they haven’t set up a breeding program?).  One night, a strike team comes into Luke’s home, knocks him out and kidnaps him.  He wakes the next day in a room that is a superficial replica of his own, and meets other kidnapped children with similar powers.  Most have either weak telekinesis or telepathy, some are stronger but none are the power houses of earlier King books. Given the telepathic ability of some of the subjects, the Institute doesn’t bother hiding certain aspects of their operations but they can easily hide deeper thoughts because of the weak powers of their subjects.  As a result, the children know they are in Maine, and that after the experiments and tests are done in the front end, they will be moved to the back end to do whatever it is they were kidnapped to do.

Over the weeks, Luke learns more about the Institute and its operations while seeing his friends move to the back end, and others join him in front end.  The people that run the Institute may be used to scaring children, but they may have gotten more than they bargained for by introducing a genius into the mix.

Overall, I enjoyed the book a lot, and the build up throughout.  King did such a great job of developing an evil bureaucratic system, with the Institute employees accepting their jobs to torture children with barely the blink of an eye.  In fact, some of them seem to quite enjoy it.  I also admit I got quite a bit of amusement out of the fact that one of the random low level employees of the evil Institute shared a name with an ex-boyfriend – I mean if an ex is going to show up in a King novel, of course it’s better if they are a character that barely has a name rather than the super villain or evil mastermind.

I was a bit skeptical in the beginning because King did some of his classic monologuing except he had the words coming out of the mouth of twelve year old Jake and I found it very unbelievable and distracting. Granted, I am never around children and King has grandchildren so he probably knows the speech patterns of 12 year olds more than I do, and Luke does have the excuse of being a genius after all, but I was very glad that once Luke was around his peers, he no longer sounded like Jenny’s anti-capitalist hippie boyfriend from Forrest Gump: “You nailed it, Mom. The trustees’ll kick it to the wealthy alumni, the ones who made mucho megabucks thinking outside the box but still love the ol’ Broderick blue and white.” Between that and referring to his mother as “mamacita,” I feared that Luke was going to be exhausting but fortunately this speech pattern only lasted one chapter.

Outside of that initial critique, the novel was classic King – tight plot, driven by characters that try to do the right thing, with villains that are clearly villains, with a big show down at the end.  I think King has taken the criticisms about his novel endings to heart because the last few of his novels I’ve read have all worked well within the narrative – I still love his build up most but it’s been quite a while since one of his endings has been a disappointment or detriment to the rest of the novel.