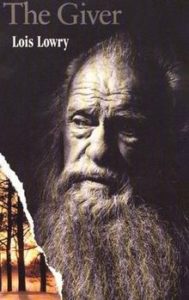 I was 11 when The Giver was published, and I remember my 7th grade English teacher, the next year, reading it aloud to my class. It was my first exposure to dystopian fiction and I ate it up. Everyone in my class had their own copy so we could follow along, and within a few years my copy was completely dog-eared and tattered, as I read and reread. At some point, having moved on to more sophisticated dystopias as I got older, it ended up in the giveaway box and I haven’t read it or thought about it in years. Last year, it showed up as a suggestion for me on Amazon, and I learned that since 1993 Lois Lowry had written three more books in the same universe–on a whim, I bought the whole set, but it took me almost another year to get around to reading them.

Brief summary of all four books: The Giver is the story of Jonas, who lives in a society where they have removed everything unpleasant–there’s no pain, no sorrow, no anger, but conversely there’s also no real joy or love. Jonas is chosen at age 12 for a big job–to be the keeper of his community’s memories from the time before, when people lived differently. He gets these memories from a man who’s known only as the Giver. As he learns more about what life used to be like before everything was the same all the time, he’s soon forced to make a choice between continuing the dull, safe life he’s been born into, or something more real.

Gathering Blue tells the story of Kira, an orphan with a talent for weaving, who’s soon chosen by her community to work on the 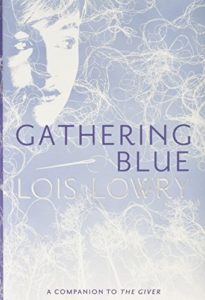 ceremonial robes that their Singer wears when, each year during a special ceremony, he sings the entire history of the community and what life used to be like. Kira soon learns that things in her community are not what they seem, and soon she also has to choose what kind of life she wants.

Messenger brings back a character from Gathering Blue, Matty, who has left the community he lived in with Kira to live in a place called The Village, a sort of refuge for those who have chosen, or been forced, to leave their communities for various reasons. In addition to telling Matty’s story, Messenger also reveals what happened to Jonas and Gabriel from The Giver, and brings back Kira from Gathering Blue.

The fourth and final book, Son, takes place partly in the same community where Jonas grew up, and partly in the Village from Messenger. It is primarily the story of Gabriel’s mother Claire, although it also brings back the Big Bad from Messenger for a final showdown. 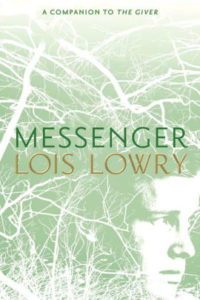 These are simple, straightforward books, which I think turns a lot of people off of them. Like a lot of dystopias there are plenty of unanswered questions, although I think there’s even more in these books than in some others I’ve read. All of the communities that we are introduced to throughout the books are wildly different, and there are certain things that just make no sense at all–how did the leaders in Jonas’s community take away everybody’s ability to see color, for example? People seem to get it back when they leave the community, so it wasn’t through any kind of permanent method. If Jonas’s community was so committed to the idea of Sameness, why did they even bother preserving the memories that the Giver has? It seemed like they caused an awful lot of trouble, and that’s not even to mention the question of how, exactly, those memories are preserved and transmitted. I remember as a kid, just accepting that the Giver could transmit memories by touch, and that once he did so he couldn’t remember them anymore but with this reading that struck me as very odd.

There’s a certain element of magic in the books. Certain people have strange powers that others don’t (the Giver, for one), and this gets more pronounced as the series progresses. By the time Son comes along the books have gone from the standard sci-fi feel of The Giver to a sort of magicky folktale vibe. There’s a whole thing throughout the series about how the people who have these special powers tend to have “pale eyes,” which I found squicky–there’s no mention of race, or too much about appearance in general in these books, other than people with “pale eyes” being special. This was maybe my biggest issue with these books.

I did enjoy reading them, particularly Gathering Blue and Son, which, I realize, are the two with female protagonists. Maybe I just identified with them more. I found I really enjoyed the folktale feel of Son in particular. I was also glad to learn the fate of Jonas and Gabriel as the ending of The Giver is ambiguous, although at the same time, maybe learning their fate took away some of the power of The Giver. I’m not sure I’ll read these again (other than Son–I really liked it!), but I am glad I read the whole series.

Rating: 4 stars for Son, 3 for the rest of the series.

CBR11Bingo: Award Winner (The Giver is a Newbery winner)