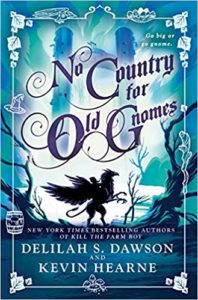 Last year Delilah S. Dawson and Kevin Hearne released, and I reviewed, Kill the Farm Boy: The Tales of Pell.  It was a hysterical twisting of fantasy tropes that had my husband and I literally laughing out loud while reading.  This year they put out another book set in Pell, No Country for Old Gnomes.  The nifty thing about these two books is they are standalone.  You do not need to have read Kill the Farm Boy to read No Country for Old Gnomes, this is not a continuation but a separate story.  However, a few characters from Farm Boy appear in Old Gnomes so you do get a bonus level of humor if you have met them before.

No Country for Old Gnomes is just as side-splittingly funny as the first book.  I’ve been putting note tabs in books I’m reading to be able to reference when writing the review.  Roughly half way through this book I stopped because I had already marked so many amusing passages not all of them could be useful in the review writing process.  Also it would be giving away too much that would be better for the reader to experience on their own.

Like many a fantasy book that have come before, this involves a reluctant fellowship on a journey with a common purpose.  There is also a twin assuming his brother’s identity, an unrequited romance, a quest of self discovery, a mission to avenge a fallen comrade, a generations long undertaking of preservation, and a cast out seeking to understand where the law came from that caused her to kind to turn their backs.  All told with tongue firmly implanted in cheek.  Farm Boy focused mainly on the human inhabitants of Pell.  Old Gnomes brings the attention to other races; gnomes (naturally), halflings, dwarves, ovitaurs (think similar to a faun, only a human sheep hybrid), and a gryphon.   Dawson and Hearne lean hard into the most common tropes (particularly for the gnomes, halflings, and dwarves) creating funny exaggerations of these races, while putting their own spin to them as well.  The duo also work in a fair amount of pop cultural references too.

Gnomes are known for their tidiness and bright cheerful cardigans.  Halflings are known for their luxurious body hair and voracious appetites.  The two races are on tolerable terms, although relations have recently been rapidly degrading.  Offi Numminen and Kirsi Noogensen are gnomes that have been driven from their homes by firebombing halflings.  Offi is a mechanical genius but a goth and therefore a misfit among gnomes.  Kirsi was born with the power to curse, as opposed to bless, and has long rued she did not get the other kind of magic.  Faucon Pooternoob of the Toodleoo Pooternoobs is a halfling on a mission, to capture an automaati for his boss, and a personal quest to get gnomes to establish better building codes.  Dwarves must leave their homeland to purge the violence within before returning to settle down and Baggi Binns, a cheerful fellow, is finding it hard to summon the violence to be able to purge it.  Agape Fallopia is an ovitaur who has lived her life on the run but now suddenly is abandoned by her parents, leaving her bereft and uncertain.  Gerd the gryphon finds interacting with other races interesting as they do not see colors the way she does, or pronounce them correctly either.  However, lacking thumbs, she relies on them to cook fluffee omlets.

While there is much to be entertained by in the story, one of the best parts of both Pell books are the chapter titles and headings.  I had the great fortune to meet Dawson and Hearne on their book tour.  They described their delight in taking random bits of chapters and twisting them into titles that contain info about the chapter without actually telling you anything about it.  The headings are similar.  Neither have used chapter titles or headings before so this was a fun exercise for them.

Chapter 3.  Beneath the Sweaty Onion Flesh of a Rogue: “Listen, darlings, onions are wonderful in stews and when grilled really complement a nice steak, but if you walk around smelling like them it’s your own fault.  Wash your hands after handling them with a bit of salt to get out the stink, then again with soap, and I promise everyone will be happier for it.” – Joolia Chylde, The Clever Craft of Corraden Cooking.

Chapter 9. Calculating the Air-speed Velocity of a Laden Chicken Shack:  “Thatch tortoises lead intensely interesting lives.  For example, they…. No, I’m sorry.  I can’t pretend anymore.  After decades of research and an epic waste of time, I’ve no choice but to conclude that they are intensely boring creatures.  What am I even doing with my life?” – Mang Rove, in an introduction to the shortest doctoral thesis ever, which reads in its entirety, “Please see title,” which is called, Thatch Tortoises Are Just Tortoises That Slowly Eat Your Roof and Occasionally Lay Eggs:  and No, I Can’t Explain How They Got Up There in the First Place Even Though I Observed Them Closely for Thirty-five Tedious Years.

If you are looking for a light-hearted read, this is great fun.  If you love fantasy but want something new in the genre, this is the book you are looking for.  If you enjoy parody and like fantasy, this should definitely go on your TBR.  I am eagerly waiting for the third Pell book, The Princess Beard, which comes out in October of 2019.