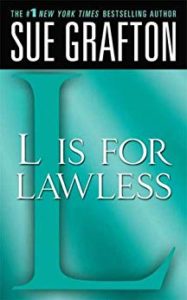 Have to say that this one was pretty good though the usual suspects are not in it much (Rosie, Henry, William, etc.). We have Kinsey following someone who stole something from a neighbor/client’s home and then gets caught up with I guess you can just say are a family of not so bright thieves.

Kinsey is still prepping for Rosie and William’s wedding in this one. She is asked by Henry to do a favor for the family of an old neighbor of both of them which causes her to go down a long winding path of ill gotten loot from decades ago.

Kinsey is still smarting over finding out about what went down with her mother’s side of the family after her father and mother died. She found out a few books ago that she has relatives that she never knew about and that her Aunt Gin had never told her about them. One wonders about Aunt Gin at times. Kinsey rejects any notion of family and then gets yanked into a case that is all about it. Irony. We still have Kinsey being a smart ass here and there, but she’s mostly out of depth in this one. Most of the book is just her running from place to place it seems.

I can’t say much about Henry or Rosie. They are in this one, but barely. It was interesting to read about Henry’s siblings and loved hearing how they celebrated their birthdays. However, we don’t spend much time with them which I thought was a shame.

The writing is good though at times the plot gets way too complicated. We have the missing money as a plot and it never made much sense to me why Kinsey still sticks with the people she does though. The Kinsey we have known to this point would have peaced out and and minded her own business. The flow was a bit off though. I just found myself getting bored towards the end (hence the 4 stars).

The setting of the book is mostly in Texas and Kentucky of all places. Since I am used to reading these books and thinking of California, it was a weird to have all of the action away from home and Kinsey’s usual band of merry men and women.

The ending was sweet though and I did laugh at Kinsey having to suck it up and reach out to her mother’s side of the family.