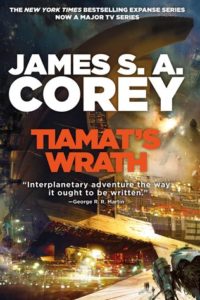 One of these days I’m going to have to do a full-series Expanse re-read. Probably not until after next year, when the last book is published. But whenever that happens, I feel like this book might be worth five stars. Maybe the last one, too. I actually finished it when it was first published over two months ago, but I’m so far behind in my reviews, this one isn’t going to super informative. I remember it traumatizing me, but in a good way.

All that to say, this was a really solid penultimate novel, and I think it could be more than solid in retrospect, once the whole story has been told.

Tiamat’s Wrath picks up a couple of years after Persepolis Rising. Holden has been a prisoner on Laconia (he describes himself as Duarte’s “dancing bear”), and the rest of the Roci‘s crew has been working for the resistance. Bobbie and Alex are working together on a new ship, while Naomi and Amos are off on their own (the Roci itself is docked somewhere, hidden). All of them are feeling the effects of being separated and under stress for so long.

Added to the mix are two more POV characters. Back from book four is Elvi Okoye, who is now working for Laconia on a scientific mission, trying to ostensibly figure out what killed the Protomolecule builders millions of years before. And then there is Teresa Duarte, the fifteen year old daughter of the megalomaniac Laconian Emperor, Winston Duarte. Even though he fancies himself well on the way to immortality, thanks to the Protomolecule manipulations of our dear old friend Paolo Cortázar, she is being groomed as his replacement; the heir to the Empire, so to speak quite literally.

As always in these books, you are in for a wild, emotional ride. Something big and terrifying always happens. Our beloved crew has to cope. And this time the threats they face just seem to keep getting bigger.

One of the things this series did that I think is very smart is that, with the time jump of thirty or so years last book, we’ve got built in emotional conflict. There is so much meditation of death and endings, and the bittersweet nature of even their most successful victories, because a lot of their people just aren’t there to share it with them anymore, and more could go at any time. The authors just understand how to bring an essential humanity to their story that I appreciate more and more as the story goes on.

I can’t wait to see how they are going to end this thing. I’ve been surprised and scared and pleased the whole way through. I have a really hard time believing they’re not going to stick the landing.