> FAQ Home
> Genre: Fiction > Are there really people willing to read twelve of these? 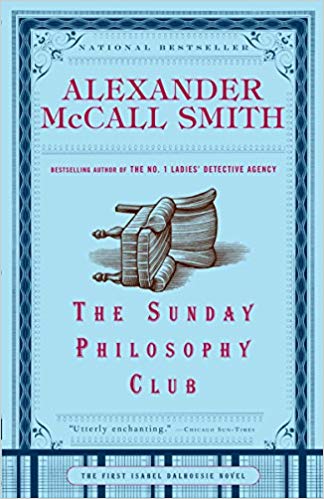 I seem to be on a losing streak with mysteries. I bought this one from my local Friends of the Library bookshop for $1, and  you can bet I’m claiming that buck on my tax return next year because I sure didn’t get my money’s worth. Some years ago I read a handful of books in the No. 1 Ladies’ Detective Agency series, and I remember them being fun diversions, so when I saw this other series by Alexander McCall Smith, I was curious. After coming off a rather dreary mystery, a light diversion would be just the ticket.

Four pages into the novel, when a man falls from a theater balcony, I had high hopes. It got off to a strong start, and the main character, Isabel Dalhousie, promised to be interesting (she’s Scottish and I’m a sucker for that). But then almost nothing happens for the next hundred pages, and Isabel, it turns out, is exceptionally dull. She’s supposed to be 42 years old, but she might just be the stodgiest woman in the U.K., leading the reader to visualize someone much older. Miss Marple on Xanax has a hundred times more moxie than our Isabel.

Who’s ready for a beat down?

Perhaps the mystery would have moved along quicker if Isabel weren’t distracted by two subjects that devour most of her attention: philosophy and her niece’s love life. Isabel is the editor of a journal called the Review of Applied Ethics. If you’re thinking that doesn’t sound like a full-time job, you’re right. Isabel is an heiress and doesn’t need to work, but philosophy is her passion. As Isabel contemplates the mystery, or life, or her eggs, her mind wanders to ethical dilemmas. This would be okay if Smith didn’t then spend pages sharing Isabel’s meandering thoughts on the ethics of everything from sex to lying. For example:

If somebody asked one’s opinion of a newly acquired–but tasteless–possession and one gave an honest answer, then that could hurt feelings and deprive the other of the joy of ownership. So one lied, and praised it, which was surely the right thing to do. Or was it? Perhaps it was not as simple as that. If one became accustomed to lying in such circumstances, the line between truth and falsehood could become blurred. Isabel thought that she might visit this issue in detail one day and write a paper on the subject. “In Praise of Hypocrisy” might be a suitable title, and the article might begin: “To call a person hypocrite is usually to allege a moral failing. But is hypocrisy inevitably bad? Some hypocrites deserve greater considerations. . . .”

Isabel’s second obsession is getting her niece Cat to dump current boyfriend Toby (who, admittedly, comes off as rather pompous) and get back together with former boyfriend Jamie. Jamie does seem like a nice guy, but Cat explains she’s not in love with him, which should be enough to get her Emma-wannabe aunt to knock it off. Unfortunately, Isabel doesn’t seem capable of letting it go. At one point she ponders, “What else could a girl possibly require than a Scotsman who looked Mediterranean and could sing?”

Geez, why is Isabel so obsessed with twenty-something-year-old Jamie? It almost seems like she wants him for herself, doesn’t it? At one point she even wonders about how Toby and Jamie are as lovers.

Toby would be all vigor while Jamie would be quiet, and gentle, and caressing, like a woman really. Which might be a problem, perhaps, but not one that she could realistically do very much about. For a few moments, a few completely impermissible moments, she thought: I could teach him.

Holy Harold and Maude! She DOES want him for herself. Perhaps Isabel would do better to spend more time on self-analysis and less time on prying into other people’s lives.

I thought this novel would be a quick read, but it was a tedious 250 pages. I kept going because I wanted to see how the “mystery” wrapped up. I was foolish; I know that now.

I was surprised to learn that there are twelve books in this series so far. I can understand other people enjoying this novel slightly more than I did, but I’m genuinely shocked that enough people came to the end of these 250 pages and said, “Awesome, give me 3,000 more!” Ah well, to each his own. Enjoy that $1, Burbank Public Library!