> FAQ Home
> Genre: Fiction > Based on the cover, you’d think this was about three friends. It’s really not, at all. 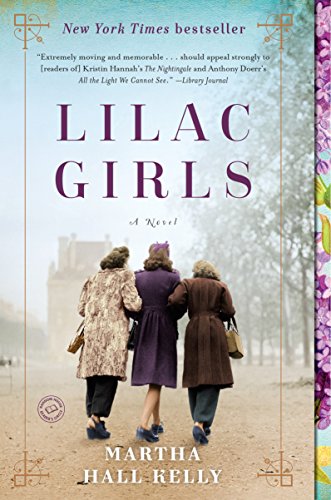 This was not what I was expecting at all.  I bought it ages ago and it’s been sitting on my Kindle for over a year.  I started it when I was travelling, I did not have the wifi turned on and so did not get the book summary when you open a book for the first time.  All I knew was this was set in WWII and featured three women from different walks of life, whose lives intersected somehow.  Based on the cover, they appear friends.  That’s not what happens at all.

What I didn’t realise going in was that two of the women meet at a concentration camp in Germany, which made it a far heavier read than I was anticipating.  Kasia, the Polish girl has been captured and sent there with her mother, sister and others from her home town.  Herta, the German doctor, works there and let’s just say, she’s not there for the well being of the prisoners.   Caroline, the third girl, lives in the US but works at a French liaison office helping displaced French persons obtain visas for travel at the start of the war.  The sections based in New York provide a stark contrast to those set in the concentration camp (as you would expect).

This is a really heavy read, the concentration camp sections are awful and disturbing to read, but it was important that they were not glossed over.  This is an area of history that should not be forgotten or sugar coated but that doesn’t make it any easier to read.   This is clearly a very well researched book and in fact the end note by the author confirms how long she took to write it and her motivation to do so.  Her motivation was the character of Caroline was a real person who did, in fact, get very involved in the rehabilitation of Polish concentration camp survivors.  The world is made a better place by people like Caroline.

This is definitely worth a read but be prepared going in, it’s not a easy read.  Aside from the caution with the heavy subject matter, this book does jump around between the stories of the different women.  Although the timeline is linear, which is a blessing, but beware if you are not a fan of different perspectives, I did find it made the story choppy.