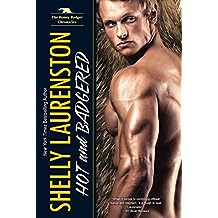 From the book blurb, because it explains this bonkers book better than I could –

“It’s not every day that a beautiful naked woman falls out of the sky and lands face-first on grizzly shifter Berg Dunn’s hotel balcony. Definitely they don’t usually hop up and demand his best gun. Berg gives the lady a grizzly-sized t-shirt and his cell phone, too, just on style points. And then she’s gone, taking his XXXL heart with her. By the time he figures out she’s a honey badger shifter, it’s too late.

Honey badgers are survivors. Brutal, vicious, ill-tempered survivors. Or maybe Charlie Taylor-MacKilligan is just pissed that her useless father is trying to get them all killed again, and won’t even tell her how. Protecting her little sisters has always been her job”

I was really put off by the title of this one, but it featured in some “best of” lists at the end of the year so I gave it a go.   I have read the Crows series of Shelly Laurenston but not any of her other series.   It’s a fairly bonkers book, in which the action does not let up from the start.   It’s also pretty violent with the middle sister always having to be pulled back from settling things with a knife or her fists.   But the three sisters were amazing and the main character, Charlie, I fell in love with almost immediately.  She has major family problems (not with her half-siblings) but loves her sisters unreservedly and is always looking out for them.

I loved the grizzly, Berg, he is one of a set of triplets so there are sibling dynamics at play on both sides of the story.  I must say I did not picture him at all like the dude on the cover!  I read on a Kindle and this is the first time I’ve really seen that picture.    The book is full of humour and overall it was a really fun read.  The author is great with dialogue and I was chuckling away at some passages particularly where the sisters have to deal with a family wedding.  There is a follow up book with the youngest sister out in March and I have already pre-ordered it.