> FAQ Home
> Genre: Fiction > Do Every Stupid Thing that Makes You Feel Alive 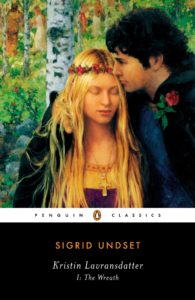 The Kristin Lavransdatter books tell the story of the life of Kristin Lavransdatter, a Norwegian woman living in the 14th century. I read historical fiction only very rarely, and a series about a Norwegian housewife in the Middle Ages wouldn’t normally be something that would be very high on my TBR list. I chose these because at some point in the last year, I was reading an article which had a short quote from one of the books. I can’t remember the quote or the context, but I was so taken with the power of that short quote that I added this to my list of must reads. I am so glad I did. These are some of the most beautifully written books I have ever read.

Each book covers a different part of Kristin’s life. The Wreath focuses on her childhood and youth, when she meets her future husband. The Wife covers her adulthood, as she adjusts to married life and raises her children. The Cross takes place after her children are grown, as she once again has to adjust to a different type of life, as an elderly woman with a new role.

I can’t really talk about plot points for The Wife and The Cross without giving away the ending of The Wreath, so I’ll try to stick to generalities here. Kristin is, I think, not a particularly unique woman for her time and place. There’s some scandal around her marriage, but for the most part I think she’s a typical representation of Norwegian life for her time. I wouldn’t think that I would have much in common with someone from the Middle Ages, but I identified with Kristin so deeply. Such is the power of Sigrid Undset’s writing that the domestic scenes she describes are universally identifiable. Take away the setting and the Catholicism, and Kristin’s feelings and thoughts–about her family, her friends, the meaning of her own life–could easily be my own. I don’t cry at books, like, ever, but I was so moved by Kristin’s experiences in a way that completely surprised me. This series is by all accounts an accurate representation of life in that time and place, but it is also just an accurate representation of what it’s like to be alive, and all the struggles that come along with trying to live a life with meaning, and trying to become a better version of yourself. Kristin wants to be a dutiful daughter, a loving wife, an attentive mother. She wants to be a devout and holy woman, but I think more than anything Kristin wants to feel alive. The mistakes she makes, and pays for throughout her life, happen because she gets a taste of what it is to feel really, truly, alive, and she can’t let that feeling go. Who could blame her? 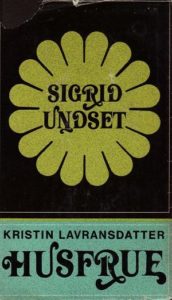 I often find historical novels to be sort of overwrought or dramatic, and they don’t seem very realistic. The Kristin Lavransdatter books feel real to me, I think because there’s very little of that sort of dramatic posturing. A lot of times historical novels also seem as though the author has just written regular modern people into a different setting. While I do feel like the basic plot of this series could be moved to the 21st century and lose none of its power, the characters still feel very true to their time period. I think that’s why it has affected me so powerfully. I never expected to feel this connection to these people and I really never expected for them to feel so real. There’s a part in The Wife, soon after Kristin’s father died, where she and her mother are talking. Her mother is reminiscing about the joy and pain of her life with her now deceased husband, and it’s just so incredibly well-written and quietly moving. There are so many other moments like these throughout these books, and all of them ring true. All of them affected me exactly the way Sigrid Undset intended them to, and the Nobel Prize she later won for her writing was well-deserved, let me tell you.

There are real stakes to the domestic dramas in Kristin’s life, but for the most part they’re very small in the grand scheme of things. Will she be happy with her husband? Will her sons grow up to be good men, or will they will be wild and rough? Will she be able to get along with her new daughter-in-law? However small the stakes, I really couldn’t stop reading. I had to know what was going to happen to Kristin, her husband, and her children. And not only were the characters wonderfully written, but the books themselves are absolutely beautiful. This passage in The Cross, as Kristin sits and reflects on her life now that her children are grown and her husband is dead, is so lovely and sad:

“The last notes of the church bells’ noon greeting to the Mother of God died away in the light-sated air up among the peaks. The countryside seemed to be settling into sleep beneath the flood of white sunlight. Ever since the dew-soaked dawn, scythes had been ringing in the flowery meadows; the scrape of iron against whet-stones and the shouting of voices could be heard from every farm, near and far. Now all the sounds of busy toiling fell away; it was time for the midday rest. Kristin sat down on a pile of stones and listened. Only the roar of the river could be heard now, and a slight rustling of the leaves in the grove, along with faint rubbing and soft buzzing of flies over the meadow, and the clinking bell of a solitary cow somewhere off in the distance. A bird flapped its way, swift and mute, along the edge of the alder thicket; another flew up from meadow tussock and with a harsh cry perched atop a thistle.

But the drifting blue shadows on the hillsides, the fair-weather clouds billowing up over the mountain ridges and melting into the blue summer sky, the glitter of the Laag’s water beyond the trees, the white glint of sunlight on all the leaves–these things she noticed more as silent sounds, audible only to her inner ear, rather than as visible images. With her wimple pulled forward over her brow, Kristin sat and listened to the play of light and shadow across the valley.

All fires burn out sooner or later.”

I loved these beautiful books, and I’m very thankful I happened upon them. I’m so glad I read them.