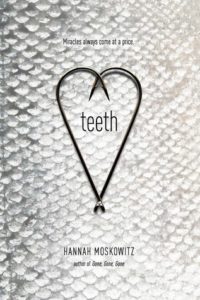 I actually just heard about this novel from a recent list on Pajiba titled: “6 Romance and YA Novels We’d Like to See Netflix Adapt Following ‘To All the Boys I’ve Loved Before’”, and upon seeing it described as being about a “magical gay fish boy”, I immediately started text-hollering to my best friend about what a big time it is for fish-people/cryptid… lovers (which is one of our running jokes right now, I KNOW it’s not as funny to anyone that isn’t the two of us). But anyways, I just had to know more. And what I got was a strange mix of magic and escapism, but a lot of realism and emotion too. It didn’t entirely work for me, but it also wasn’t awful either so I’m not entirely sure how I feel about it at the end of the day. Let us dive in:

Teeth is told from the point of view of a teenager named Rudy, whose family has recently moved to a small, remote island where people go when they are ill to feed on a specific species of fish which only live there: these fish are said to have magical properties and work to relieve the symptoms and progression of many illnesses, including the cystic fibrosis which Rudy’s young brother has. Rudy is out of sorts here, and is facing a crisis of his place in his family, group of friends, and the world in general, when he happens to meet a mysterious fish boy about his age, who many on the island refer to as a “ghost” or see as some kind of spirit. Over time, Rudy and the fish boy (who goes by the name Teeth) bond and Rudy learns more about where Teeth came from, as well as the realities of the fishing trade and fishermen around the island. Their relationship is a strange one, punctuated by a lot of misunderstandings and anger, but there is also a lot of connection and love there too.

But while this book brings a certain magical edge, there is quite a darkness to it, even aside from the original setup of illnesses bringing people to this island as a saving grace: there is an inherent loneliness throughout the novel, as well as other deep feelings of regret, conflicted morality, and searching for an identity. Another major facet of the novel is the subject of sexual assault and the lives thereafter of victims and survivors of it, which for the most part I felt was effectively dealt with, though it maybe could have been more directly spoken on at times: actually, a few topics could maybe have been expanded on, as some of the interactions and dialogue felt a bit clipped at times, though this is in part due to Teeth’s somewhat lacking vocabulary (I never knew how annoying the word “whatever” could get after being used repeatedly), as well as a reluctance of the characters to want to talk on some subjects, which is completely understandable. Unfortunately, though, this distance in the dialogue and internal narrative made me feel like I wasn’t really being let in fully, and this was a barrier that I just couldn’t break into in order to get the full effect of these potentially really powerful emotions that others might find.

So at the end of it all, I found Teeth to have a lot of potential and honestly a very interesting protagonist in Rudy, as he struggles with personal faults and coming to terms with the realities of his life. But ultimately, I felt like I was being kept at arms length in a way, and wanted a bit more from this novel in a way that I don’t if I can really explain. Definitely a darker YA novel than some others I’ve read recently, and with an interesting premise that I think might intrigue those looking for something a little different (shoutout to The Shape of Water, by the way, which obviously I couldn’t help but think of in relation to this book).