> FAQ Home
> Genre: Fantasy > I was astonish’d at how greatly I admired the writing of this book 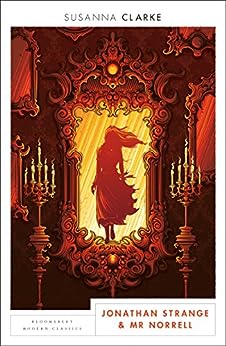 The title of this post will be my one attempt at a pseudo-19th century style–I won’t inflict such an atrocity upon you any more, dear readers. I’m rather late to the game when it comes to reading Jonathan Strange & Mr Norrell–after all, there’s already a miniseries adaptation (which I have not yet seen)!

But so deeply was I affected by… ahem!

I’ll just say that the writing style blew me away. I’m certainly not the first to describe this book as ‘If Charles Dickens and Jane Austen got together to write fantasy…’ but there really is no better description to get to the essence of this book’s charm.

Warning: mild spoilers in the synopsis.

The book takes place in an alternate-world England in the grip of the Napoleonic Wars–an England where magic once existed, but no longer does. Yet it is a world in which learned gentlemen of comfortable means claim ‘magician’ as a profession (as do vulgar vagabonds upon street corners). These gentlemen are proud to say that they are ‘theoretical magicians’; that is, they study the history and theory of magic but decline attempts to perform it. After all, ‘practical’ magic no longer exists in England. But two men–two wildly different men, the eponymous Jonathan Strange and Mr Norrell–both endeavor to bring magic back to England, to help defeat the French, to protect the country they love. The problem is that England doesn’t seem big enough for the both of them. When Strange starts talking about bringing back true English magic, the magic of the faeries and the strange Raven King, John Uskglass, Norrell fights him at every turn. Magic becomes a battle of the wild versus the safe, the mad against the predictable, and it seems as though they might destroy themselves as well as those around them in their fight for supremacy.

In many ways, I liked the style more than the substance of this book. As I mentioned before, Susanna Clarke’s writing is perfection. She captures the narratorial voice so unique to older fiction, but deftly employs it in a way that never feels contrived or out of place. She weaves together multifaceted plots and larger-than-life characters as well as Dickens ever did, and her eye for societal nuance and irony is as great as Austen’s own. I am no student of the Napoleonic Wars, so I cannot comment on the historical accuracy or inaccuracy, but there was never anything that struck me as out of place. It is, after all, a world in which medieval England’s history has been rewritten to include faerie invasions and magical kings who ruled for centuries.

The plot was, in some ways, predictable–although in other ways not at all. It is clear from the start, for instance, that Strange and Norrell will not be able to work together forever. And yet their relationship is complicated, as complicated as the men themselves, and with more pathos than one first imagines. The characters with which Clarke surrounds her eponymous heroes are in many ways, the real stars, even when they do not get as much time to shine as they ought (for example, the criminally underused Arabella, who is far more than Strange deserves). Drawlight is delightfully horrid from the start, while Lascelles, who at first seems to pale in comparison to his obsequious comrade, evolves into a truly nasty piece of work. I wish more had been made of Stephen Black, who is probably the only truly decent man in the cast, although his perspective is important and compelling.

Yet I think the reason why I loved this book so much is a very personal one. In many ways, Clarke has created a caricature of academia (certainly of 19th century academia, but arguably extremely reminiscent of modern day academia as well). I laughed through the first few chapters of the arguments between the theoretical magicians, and sent a screenshot to my fiance of one passage where Mr Norrell is horrified to think that he might part with forty of his precious books (of which he has thousands). All the footnotes to made-up scholarship and little side stories constitute an immense part of the book’s charm.

I think all of this is why I am rather fond of Mr Norrell most of all. In Jonathan Strange, Clarke created someone who could be called a hero, someone who takes risks and fights on the battlefront. But Norrell is no hero. He is a self-centred man who cares first and foremost for himself, his prospects, his reputation, and his fame. He hoards and covets, using his wealth and influence to bully those around him. And yet I found him remarkably compelling… more so than Strange, whom no doubt one is suppose to admire more, but who I found to be extremely self-centred in his own way. Norrell is ridiculous, but he is pitiable as well. He surrounds himself with men who use him (some more nobly than others), even as he thinks he is the one using them. Clarke has created a man who seems real in his faults and yearnings and eccentricities, and this is one of the greatest elements of the book–that she is not afraid to make a hero of this man who is anything but heroic.

It’s not without its faults–the third act was not as engaging as the first two until the climax, and the ending left something to be desired–but for a fantastical twist on historical social commentary, Jonathan Strange & Mr Norrell offers much to be enjoyed.