> FAQ Home
> Genre: Mystery > A little spoilier and crankier than I planned 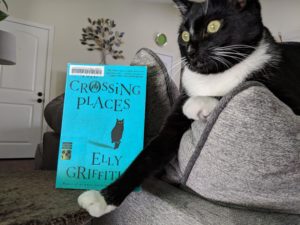 I’m not sure what I thought of this one. It was a quick read, and a decent mystery, and I (mostly) liked the main character. But I didn’t love it, and I can’t explain why without spoilers, so be warned!

Ruth Galloway is an archeology professor. When a skeleton is found at the local saltmarsh, a detective named Nelson asks for her help in identifying the remains. He’s hoping to finally close the case of Lucy Downey, a young girl who disappeared 10 years previously, but it turns out the bones are from the Iron Age, preserved by the peat. However, when another little girl goes missing, Ruth finds herself involved in the case more than she planned.

Ruth felt real. She’s flawed and scared and worried and unsure about a lot of things, and I liked that she wasn’t a typical heroine. The police have been receiving mysterious letters ever since the first disappearance, talking about rituals and mysticism and the power of the saltmarsh. Ruth is helping Nelson decipher the letters. In the meantime, two of her former colleagues (an ex-boyfriend and a mentor) are back in the area, for archeological purposes or just to make nuisances of themselves. Ruth also hangs out with a friend from work, and some neighbors. Here’s where things got eye-rolly (and SPOILERY):

Pretty much every named character is in on it. The letters, the murderer…pretty much everybody Ruth knows is a villain, and she had no idea. It just seems awfully unlikely that her entire social circle is involved in this decade-long plot! Everybody’s too involved with each other, and with the crime, and it just got silly. Plus, if I’m being spoilery anyway, I didn’t like the end. The whole “I rescued a girl and it fired up all my maternal instincts but it’s perfect because I had a one night stand with a married detective and now I’m going to have a baaaaaaaby and everything is grand!” thing was just…what? Too much, too fast, too ridiculous on top of everything else.

I did like this more than it sounds like! I’m just not sure I’ll read more Ruth Galloway mysteries. BUT, she references Wilkie Collins’ The Moonstone, which I reviewed earlier this year, so I felt all literary and stuff.