> FAQ Home
> Genre: Fiction > Talk about smashing in the skull of the hand that feeds you. 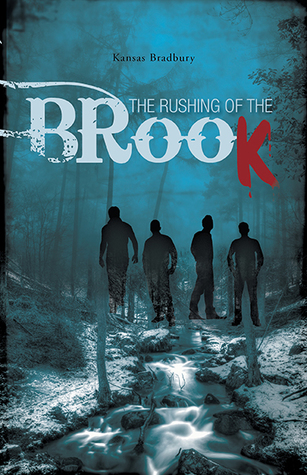 This book came to me as part of a book offer for Cannonball Readers, in exchange for which we promise to give a fair review. So here is the fair review: in short, I was… disappointed and frustrated, over and over again.

Fundamentally, I blame the editor more than the author, because what happened for the most part to make me hate The Rushing of the Brook as much as I did is that it is incredibly sloppy. There is a cutting back and forth between the main characters (a group of kids) and the villain (a serial killer and rapist who moves to their hometown). The kids have an emotional intelligence that is completely unrealistic and distracting. The villain is two-dimensional and violent but somehow not at all haunting. The cutting back and forth is sloppy: the storylines do converge, of course, but the timelines are not concurrent in an obviously-couldn’t-do-the-time-math way.

Also, the book is on the one hand clearly meant to take place in a generic American town – there are references to the FBI, to “county jail,” and to speed limits posted in MPH – but is on the other hand clearly written by a Canadian who didn’t bother to learn that they are often speaking in Canadianisms – references to the United Church, “grade four” as opposed to “fourth grade,” and Bloody Caesar, a drink I love, but no one in America could order at a bar.

Where was the editor?

There is one exception to the “sloppiness made me hate this book” argument (and here come spoilers, and also, trigger warning for rape), which is that about a quarter of the way into the novel, a “difficult woman” (as Roxane Gay would put it, ie: a woman who is having feelings other than the only feelings allowed her by society, misogyny, and gendered role restrictions) is raped, graphically and violently by the villain. This experience “cures” her of the complicated feelings she has been having about being a wife and mother, and she returns home to her wifely and motherly duties with no complaint, seemingly forever. When the book jumps forward in time, her daughter remembers this time as a turning point when her mother became her mother again, and how much of a motherly role model she is. HARD PASS. NO THANK YOU. BOY, BYE. So much to unpack, so little time. You get it. I’m out.