> FAQ Home
> Genre: Fantasy > I had expected it to be bigger, and cleaner, and more colorful. But still, it is a jewel. 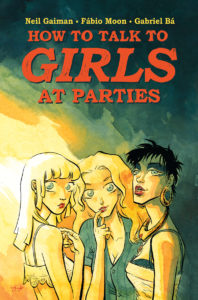 The trope of the opposite sex being alien is so old that’s it’s already so far gone that it’s on another planet all of its own. Nevertheless that’s the premise of this book. Men are from Mars and women are from Venus. Or rather, Enn is from Earth and all the girls at the party are from…somewhere? Spacy-thing. Doesn’t matter. His friend Vic drags him to a party with the advice

“You just gotta talk to them.”

It’s an old joke and it really is all this story is. The story is small and available for free online but the comic book is worth it for the artwork. The visuals are stunning and along with the poetry this little story is elevated into to something that is almost like pure play.

Note that for the next section there is a content warning for rape and sexual assault.

But. Reading this now, something doesn’t sit well with me. Particularly the ending. Vic takes Stella upstairs, but then suddenly comes rushing down telling Enn that they need to go. You could read it literally of course. The alien almost won over the boy, but he escaped and when she comes down the stairs she is furious that he ran off. Or you could read it as an attempted rape, as in Vic tries to rape Stella.

Then he said, “You know . . . I think there’s a thing. When you’ve gone as far as you dare. And if you go any further, you wouldn’t be you anymore? You’d be the person who’d done that? The places you just can’t go. . . . I think that happened to me tonight.”

“You’d be the person who’d done that?” Reading that made me feel squicky, like that’s rape right? Vic then throws up and runs off crying. I don’t know what to make of that.

So. here’s a quote from the book to finish us off.

“I had expected it to be bigger, and cleaner, and more colorful. But still, it is a jewel.” 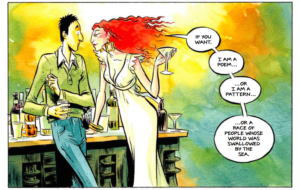