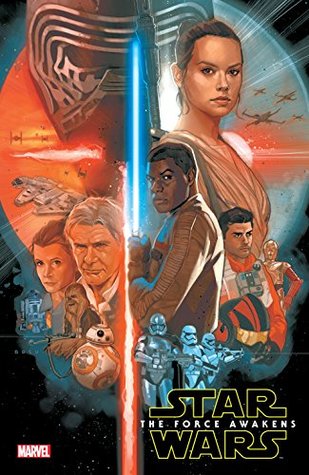 Okay, did you read the hilarious tweet conversation this summer between Chuck Wendig and Sam Sykes?

I’ll wait while you read it, because it’s a damned delight of an exchange between two writers who love their work and appreciate genre and enjoy happiness.

And then there was another one, this fall. It’s here.

Okay. So, the above was the first I had ever heard of either Wendig or Sykes, and I instantly became a more-likely fan of both because of these interactions. Amazing, the power of social media, am I right?

I digress. I became a probable fan, and started following Wendig on instagram. He has a cute dog/food/life situation, and seems to absolutely adore the work he does. And then, lo and behold, I discovered that he writes for Disney sometimes, doing Star Wars stuff.

And by “Star Wars stuff,” I mean that when I got some random coupon from amazon for a free Star Wars graphic novel and OF COURSE I used it for “The Force Awakens” and then discovered that Wendig had done the adaptation, I was unreasonably happy for this author whose work I’d never read before and whose quick wit I happen to believe I probably enjoy.

All of which is to say, this is the first work by Wendig that I have read, and it is fantastic.

I have watched “The Force Awakens” a bunch of times. I love it a lot. I also like graphic novels quite a bit, though I don’t read them as often as I might like (see also: someday I’ll finally get to all the Dark Tower material available in graphic novel form). And I really think this adaptation was great.

Not perfect, though. I did feel like the characterization of Rey had a much longer warming period in this adaptation than she has in the film. But that’s barely a low point, and there were far more high points than low.

If you ask me, Rathtar are meant to be drawn… that sequence was aces in graphic form. There’s also a lovely panel just before the Starkiller Base hits the Hosnian System that identifies by name Lanever Villecham and Korr Sella standing on the balcony watching the attack come for them, details that couldn’t be included in the film.

The characters are drawn very identifiably, but without any pressure to be photoreal versions of the actors. The best lines from the movie are included, but there is less dialogue than one might imagine; more often, it is just panel after panel of lovely drawing showing the action unfolding in all the right ways.

It’s a job well done, and I’m very impressed, and very grateful to own this work. I have a feeling it’s going to be a new, regular comfort read.