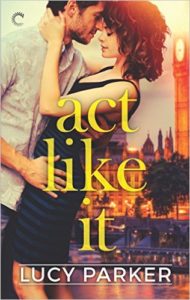 From the author of Act Like It comes another Cannonball favorite, Pretty Face. And while, if I remember right, Pretty Face wasn’t as strongly loved as Act Like It, I definitely enjoyed it more. Act Like It was just okay in my book; this one gets an additional two stars.

Grumpy director Luc Savage is reviving a classic West End theatre, and needs a new star. Enter Lily Lamprey, clearly the best actress for the job, even if she doesn’t have the resume. Lily is a soap star, low man on the theatre totem pole, and is “too sexy” for the Elizabethean drama they are staging, but she’s a good actress, and Luc takes a chance on her. Of course, sparks fly, and even though they try to fight it and definitely try to hide it, word gets out and the rumors start to fly as well, painting Lily as just another actress sleeping her way to the top, and jeopardizing Luc’s career as well.

One thing I really enjoyed about this installment was the way Parker addressed the very real threat to both careers. So often, we devour Hollywood gossip as just good juicy stories, but we forget that the salacious things we read about actually affect real people. Lily’s reputation is on the line – sleeping with the director, whether it’s true love or not, is often frowned upon, and can truly damage one’s career – and I liked that Parker included some pretty serious handwringing about that. And Luc rightly doesn’t want to be known as a director who takes advantage of his new starlet, and so they both resist as long as they can, but, as is so often the case, their passion for each other overcomes their sensibilities. Another interesting angle is that Luc is some years older than Lily, and that’s not glossed over in the book; Parker deals with it head on, with both characters addressing the situation with varying degrees of seriousness.

I think what I liked best about Pretty Face is that it felt real. There was no instant love connection (although maybe a bit of instant lust), the characters felt real and measured, Parker allowed us to see their flaws, and even the ending felt real. Kind of a “we love each other and we’re going to try to make this work but we know it’s not always easy”. That’s the kind of happily ever after I can get behind.