Registration Is Open! Sign Up Today
> FAQ Home
> Genre: Fiction > Seldom has so much stupidity been written by such a smart man. 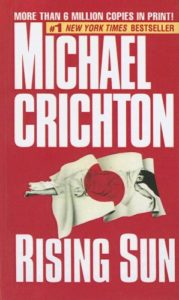 I’ll start this review by briefly describing the story. I’m only doing this to get it out of the way, because I’m not going to talk much about it in the rest of the review.

Celebrating the opening of its new headquarters in downtown Los Angeles, the Nakamoto Corporation throws a lavish party filled with businessmen, celebrities, and politicians. During the party, a young woman, Cheryl Austin, is murdered. Police Lt Peter Smith, Japanese liaison with the LAPD, and Cpt. John Connor are given the task of investigating what appears to be a complex conspiracy connecting Washington, DC, and a Japanese multi-national. So the book ends up being a forgettable episode of CSI and The Da Vinci Code. Most of the book is told from Smith’s point of view (though there are scenes that he couldn’t possibly have witnessed, but whatever), and John Connor is a Sherlockian detective who knows everything almost immediately but never tells his colleagues what’s going on, preferring instead big reveals at the end of the book. The story, such as it is, gets a solid 2.5 stars. It’s not uniquely compelling or memorable, and there aren’t many surprises along the way. Further, the science-y bits tend to have that enhance feature so tritely used in lazy procedurals.

Oh, and for extra funsies – there are only two kinds of women in this book: eye candy that only exists to titillate, and beautiful women to be appreciated from afar. The closest thing this book has to a woman with personality is a beautiful (like, seriously. She’s really pretty, you guys) Asian of mixed heritage who is described as being so pretty it’s shocking that she works in a lab. For reals. She could’ve been a model (but it “didn’t hold any interest” for her).

(And, no, I’m not forgetting Smith’s ex-wife. She’s barely recognizable as a human being, let alone specifically a woman. She’s a monster of raw ambition and unapologetic indifference to her own daughter, except in how she can sell her to advance her career.)

Now that that’s out of the way…..this book is so fucking racist.

I mean, there were numerous times I just had to stop and ask the empty room, “what the hell, Michael Crichton?”

He, of course, vociferously denied any racism or “Japan bashing”, which was something he was heavily criticized for at the time, choosing instead to characterize the book as a warning to America against warlike and unprincipled business practices that had gradually eroded US manufacturing and removed us from the front lines of innovation and market dominance.

Which, of course, has some basis in reality. In that the 1980s was a boom decade for Japan, and Japanese companies were successfully buying up US tech companies and technology while being resistant to importing American goods. And, given the American economic downturn of the late ’80s/ early ’90s, there arose a “yellow peril” that fed on the relative dominance of Japan over the US. But what isn’t discussed is that Japan was still very much a product of post-WWII policies strictly designed to boost the devastated Japanese industrial base. It took Japan nearly 20 years to regain prewar international trade levels, at which point, the Japanese government began to ease import quotas, decrease tariffs and admit foreign capital into the country. The process was long, and didn’t make Japan popular, but it helped turn Japan into one of the strongest economies in the world by the 1980s. And, really, who can fault them for that? And, considering all the money they lent us in the 1980s (and still lend us, today), why would we want to fault them? We directly benefited from their success. And this is to say nothing of our continued occupation of the nation, which has served us well from a foreign policy standpoint (strictly in terms of giving us a firm base of operation – I’m in no way commenting on whether our foreign policy in the region has been successful).

Japan dominated the home electronics market in the 1980s, and Michael Crichton saw that as a huge blow to the alpha status that is so quintessentially American. But he ratchets up the fear-mongering to absurd levels by declaring that we are in a literal war with Japan, and are too lazy and venal to have any chance of success. There isn’t a measured critique of trade imbalances or regressive US policies. No. He goes straight to Japan is terrible, and the US is stupid, and if we don’t wake up, we’re going to become a third world country.

But for all that, he could be awfully sanctimonious with a myopic vision and a shallow understanding of numerous complex situations. I think his assessment of Japan, here, is one such instance.

What happened with Japan can partially be attributed to luck. Their focus on small cars coincided with the dramatic spike in oil brought about by various OPEC crises in the 1970s, leading to a massive uptick in Japanese imports. Also, their electronics industry was almost solely focused on home electronics, which coincided with the rise of MTV in the states, and excess cash that could be spent on expensive gadgets. But luck can just as easily go the opposite direction – as it did for Japan in the ’90s, with the rise of Silicon valley and the internet and the sudden obsession with SUVs over Eco-friendly cars. Paired with a devastating economic downturn and asset bubbles in Japan make the fear-mongering on display here all but laughable. Instead of the ’90s being the decade that saw Japan take over the world, it ended up being called the “Lost Decade” for the Japanese economy. It’s 2017, and they still haven’t fully recovered, with an aging population, limited resources, and a large amount of national debt (which the country owes itself, but still).

No, the fear here isn’t that the US was going to be taken over by Japan, it was that jobs were fleeing the US, wealth inequality was on the rise, there was a growing disparity between the educational achievements of American youth and the rest of the developed world, and other nations in the post-Cold War world were better able to compete with the United States. For Crichton, this manifested as a fear of the Japanese.

Which is why this book led to him being labelled a racist. A charge which he couldn’t refute except to say, “well, that’s what the Japanese want you to think.”

None of this is too surprising, given some of Crichton’s other, questionable, views.

What really got under my skin was his insistence on painting Japan as an alien culture that was hyper-efficient and deeply racist. There is a part of the book where John Connor is explaining to Peter Smith (oh, god, Connor just goes on and on….and on about how Japan is better than the US, or smarter than the US, or more ruthless than the US, or incomprehensible to Americans….) how the Japanese justice system is uncompromisingly efficient and reliable. He talks about the conviction rate in Japan for violent crime being upwards of 99% – which is actually true, but not even remotely for the reason Crichton gives.

This mischaracterization so perfectly represents all the problems I have with Michael Crichton and people who think like he did: a general familiarity with basic facts while only having a surface understanding of what they truly mean. You see this so much in the kind of white racists who have lots of black friends, or the nice guys who just can’t find a woman because women only date assholes. You know the type, I’m sure. I bet if Michael Crichton were alive today, he’d be writing about how social justice warriors and Millenials are ruining this country, and the alt-right only wants to push this country in the right direction, and are being misrepresented by the liberal media.

Am I being too harsh?

I don’t know, but what I do know is that towards the end of this book, John Connor once again goes into this diatribe about how “Japan is the most racist country on earth” and that he moved back to the US because he was tired of how the Japanese treated him. He describes how they talk about him behind his back because they assume he can’t understand their language, and laugh at him for looking differently. He says, and I’m quoting here, that he moved out of Japan because he was “tired of being a nigger.”

Seriously. What the ever-loving-fuck, Michael Crichton? How do you on the one hand say that the Japanese are the most racist people on earth, and then have a white character say that he felt that way in Japan, so he moved back here to the US? That is such a brazen disregard of the racial climate of the US at any point after it’s founding, but especially in 1992 (this was published a mere four months before the LA Riots, and is set in LA – where Michael Crichton lived).

I mean…..Michael Crichton was kind of an asshole, right? I’m not off-base in saying that?

Needless to say, I don’t recommend. If you own a copy and haven’t gotten around to reading it, just throw it away.

Not previously reviewed for CBR.