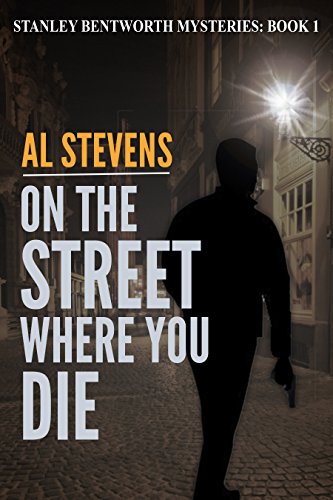 This one doesn’t count as a “cozy” mystery, I don’t think.

I have mixed feelings about it, though.

Stanley Bentworth is not your typical private eye — he’s not particularly tough, for one thing, just practiced at looking smart. And also just barely making ends meet, if that.

He’s also stereotypical AF — but so is the writing.

The big man moved into the light. The desk lamp cast shadows upwards on his face giving him a fierce, chiseled look, hardened and set with a bigger jaw than anybody needed. His blue-gray eyes scanned the room and settled on me. – Page 2

I mean, I knew from the Kindle write-up I was getting a hardboiled noir kind of story. And it has almost everything, and all a little off kilter. From Stanley to his nephew the hacker to his on-again, off-again girl, the whole thing just ain’t right.

He looked me up and down. “You talk tougher than you look.”

“If you want somebody found, I’m your man. If you’re looking for muscle, I’m not it.”

I wish people wouldn’t be so quick to notice that. – Page 5

I kept expecting the word “mook” to be thrown around.

Despite all that, I did enjoy this; Stevens did a not reprehensible version of bringing the noir detective with his drinking and smoking into the modern day; the guy he’s working for is an investment banker with an even shadier past. His sister has a stalker ex-boyfriend. By the end of the book, I was a little concerned with Stanley’s ability to walk around.

It’s a reasonable mystery; there’s a reasonable amount of action, and if the writing and dialogue is a little bit too on-point I find myself willing to forgive it showing its roots so very baldly.

“I do. And next time I’ll bring some.” He sniffed his glass, closed his eyes, and shook his head. – Page 7

If you like mystery you’ll probably enjoy this. If you like Chandler or Hammond you could give it a whirl. It was…okay? But not worth me whipping out my Chandler metaphors like something you never want to see again.