> FAQ Home
> Genre: Non-Fiction > I still wish we’d have done this one for CannonBookClub.

This book was an alternative pick for the non-fiction (Hollywood history-centric) #CannonBookClub, and it was my pick. I saw it and I knew I had to read it ASAP, even if it didn’t end up winning the vote (it didn’t; that honor, of course, went to Life Moves Pretty Fast, which I haven’t read yet as of writing this review).

I’d actually never seen Breakfast at Tiffany’s before a couple of weeks ago, though I’m familiar with its legacy, both positive and negative. (Positive: Audrey as fashion icon, a central pivot point in changing sixties womanhood; Negative: Mickey Rooney and the racist portrayal of the character Mr. Yunioshi). Watching the film for the first time in 2017 was an interesting experience. It’s tame in content compared to both its source material and the more no-holds-barred approach we have these days (relatively) in terms of film and TV content. Watching it is simultaneously like stepping into a time machine and visiting a more (on the surface, and perhaps entirely illusory) innocent past, and watching the end of that same era begin to appear. I wasn’t aware of the extent of the latter until reading this book, however. Wasson really puts into context how revolutionary Breakfast at Tiffany’s was for Hollywood film, for fashion, for women in film, for romantic comedies. 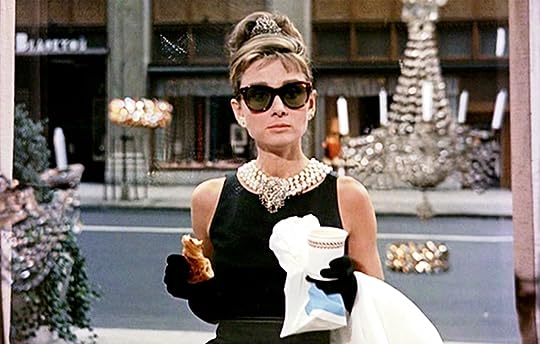 Forcing down the hated Danish.

You can feel the push and pull throughout the film, between a more conservative, restrictive mindset (most prevalent in that romantic Hollywood happy ending, and the softening of Holly Golightly from hooker to “kook”) and the inescapable boundary pushing nature of the story (a girl having sex and not being punished for it, Audrey Hepburn living a life without a man, the casual normative treatment of sex work). Slim as the book is, Wasson does a great job contextualizing all of that, planting you back in the fifties and sixties so you can really feel the historical impact of the film as people would have felt it at the time. He portrays the birth of the film from start to finish, the origins of Capote’s novel, the production process, casting, behind the scenes drama, and the film’s reception and legacy. 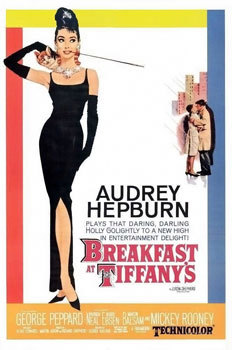 You know she’s a kook because of the cat. Without the cat: HOOKER.

Fifth Avenue, 5 A.M. is first and foremost a historical biography of a film, but bound up in that by nature are discussions of gender roles, contemporary social mores, Hollywood history lessons, and portraits of the film’s stars, most obviously Audrey Hepburn, who is the star of this book in much the same way she is the star of the film.

Reese Witherspoon had the best Audrey costume in Big Little Lies. Fight me.

The book wasn’t perfect. I mentioned earlier that it was slim. In fact, it clocks in at just over 200 pages, and those pages are on the smaller side for a hardcover, with relatively large print. I zoomed through it in several hours and it was fast and engaging, but I frequently found myself wishing Wasson would dwell a little more on his subject. This book could have easily had 100 more pages, and been the better for it. There were also individual moments that needed clarifying, for instance, he goes on and on about how unusual looking Hepburn was at the time, and the narrative voice he employs doesn’t leave much room for contextualizing that. He points out her perceived “flaws” (as they were considered at the time), but he never says why they were considered flaws, or offers up an alternative vision of womanhood. We in 2017 are living in a post-Audrey world, and these things are not as obvious to us as he perhaps thinks they should be.

A book recommended if you enjoy Hollywood history, behind the scenes stories, making-of books, and if you love the film.

[3.5 stars, rounded up just because I wanna]