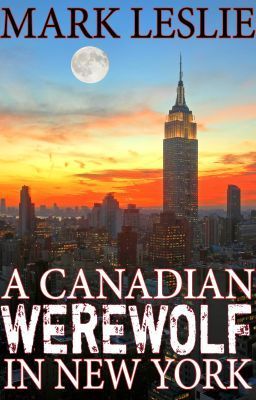 A Canadian mystery writer lives in New York city and gets involved in some supernatural/criminal hijinx. Also, he’s a werewolf (which is kind of obvious right from the cover, so, like, not a spoiler).

This book started life as a stand-alone short story called “This Time Around”. I read that and totally loved it. The author has a nice touch and a good sense of humor so I was interested to see how the whole story played out.  The short story serves as the start of the book, rolling into the continued action.

Michael Andrews (the werewolf) wakes up naked in a park with a bullet in his leg. Apparently something unusual happened during his wolf out the night before. A few little misadventures and he gets home, to find his old girlfriend waiting for him. She needs him to snoop around and find out what her fiance is up to. He agrees to do it, despite the fact that he has a deadline from his agent and an appointment to be on Letterman that night.

You’re going to need a little suspension of belief to get through it. Not because of the werewolf thing but because of all the events Andrews has to go through in the space of a few hours.  There is a LOT of action crammed in there and a few times when it’s a miracle he manages to disappear from places before the cops show up.

There’s a few things that bugged me.  I’m not sure why it had to be Letterman specifically he was appearing on. Not only does that date the story, but the scenes that take place during the taping don’t really match with how Letterman runs.  A generic late-night talk show might have been a better idea. I suspect the only reason it was Letterman was for the whole “all Canadians know each other” joke with Paul Shaffer. And maybe Mark Leslie is just a huge Letterman fan.

The other thing that bothered me was a pretty huge typo that made me laugh.  At one point there’s a newspaper headline about a “vicious wolf attack” only… it says “viscous” instead. Wince.

Also, for me, it was a little hard not to picture Nathan Fillion as Michael Andrews.

This isn’t a stellar book, but it’s short and fun and sometimes funny, and I would happily read anything else Mark Leslie decided to write in this series.