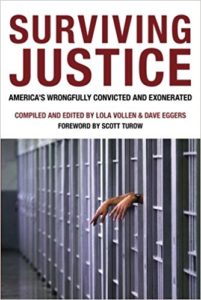 Surviving Justice is not so much one integrated story of wrongful conviction and exoneration as it is thirteen completely distinct ones. Thirteen individuals tell their stories in their own words, using their own language and perspectives. They were all given long sentences, or even death. Their convictions were all very serious – murder, rape, child molestation. They were all exonerated, most with the help of the Innocence Project.

There were some truly horrific anecdotes (a man arrested for child molestation as he walked to the store with his son on his shoulders, another whose daughter committed suicide as a result of his wrongful conviction). For me, the most significant things about this book were in the similarities and differences between the stories. By the 9th or 10th, they had become slightly repetitive – in almost every situation, they were either minding their own business or reeling from the death of a loved one when they were taken in for questioning, the police used forceful and manipulative techniques but they went along  because they were exhausted, grieving, or wanted to be helpful, the case went to trial but they still believed that the truth was the truth and it would sort itself out, they were convicted, sank or swim in the prison culture, and were eventually exonerated and released after years and years and years (decades, in some cases) with not so much as money for a bus ticket from the state. It’s unfortunate that given such a repetitive formula, more hasn’t been done to reduce the likelihood of this happening (better witness identification practices, better interrogation protocols, etc.).

As far as the differences, I personally found some stories much more compelling and even convincing than others. It’s frequently addressed in the book that there is a difference between legal innocence and factual innocence – just because adequate evidence of someone’s involvement doesn’t exist and they can’t ethically or legally be/remain convicted, that doesn’t necessarily mean that they didn’t actually do it. One or two stories, I have doubts about. A couple more probably didn’t do it but they were such unpleasant people that although they certainly were wronged, it’s hard to feel a lot of sympathy about it. Most of the stories were undoubtedly true, tragic, and very compellingly told.