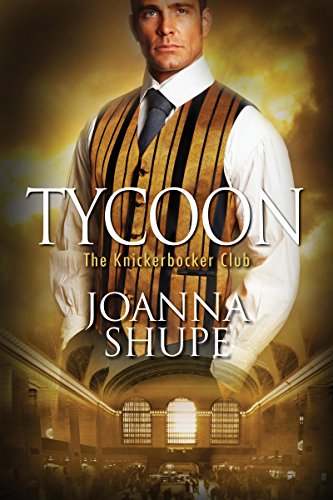 Here’s another new to me author that I decided to try out with a prequel novella – this time with better results.  I have already read the first full length book in the series (review pending) and intend to keep going.

In 1887, Ted Harper is the owner of a major bank in New York City and one of the wealthiest men in the country.  He is standing on a train platform when a young woman comes up, kisses him, and pretends to be his wife.  Not knowing what to do, but suspecting 1. that this young woman is in trouble but also 2. that she is trying to play him for his money, he ushers her in to his private car.  Clara Dawson has no idea who Ted Harper is, and is trying to get away from New York, back to her family in St. Louis, as fast as possible with only the clothes on her back.  She saw something she shouldn’t have, and is being pursued the whole way.  Over the course of the (short) trip they start to get to know one another, *maybe* decide to trust each other, and definitely give in to their mutual attraction.

I liked the writing style and I like the characters.  The story itself suffered from being forced in to the novella time frame of only two(?) days.  I definitely prefer novellas where the characters already know each other, and the book just captures the short period where they become a couple.  Ted and Clara are a nicely balanced pair.  Her buoyant personality was a nice foil for Ted’s reserved personality, and came off as charming rather than annoying (though I questioned a few of her decisions).

I’ve been enjoying more an more books set in the late 1800s lately.  I think that’s a newly popular era to write about (or maybe I’m just noticing more books set then).  I absolutely refuse to read contemporaries with billionaires in them.  I’ve done it once or twice by accident.  I am totally fine with historicals with a million young, handsome dukes running around.  These Gilded Age books fall somewhere in between on my enjoyment scale.  They aren’t nearly as offensive as the contemporaries, but they are a little too modern for me to be truly comfortable with the Captains of Industry/Millionaires thing going on.  I mean, the whole set up of The Knickerbocker Club series is that there is collusion between these powerful men to get what they want done.  Secret clubs, backroom deals and planted newspaper stories.  And then the reader is supposed to applaud them for being successful?