> FAQ Home
> Genre: Fiction > I Came For the Dystopia, I Left With the Misogyny

Where to start with this review?  First, I think I missed the boat on this one.  I think had I read it in high school or college I would have enjoyed/appreciated it more.  I’ve read more compelling dystopian novels and this one just doesn’t compare. Saying that, I feel like the wrath of the reading world will rain down upon me.  “1984” seems to be a classic for many readers and I can appreciate it that. What was most powerful about the novel was the world that George Orwell created.  He aptly took the communist structure of the Soviet Union and took it to its logical conclusion.  At the same time, he doesn’t let the West off of the hook.  He seems, instead, to be critiquing the entire structure of the Cold War.  Mr. Orwell was able to detail how totalitarian government structure their programs and ensure their power. 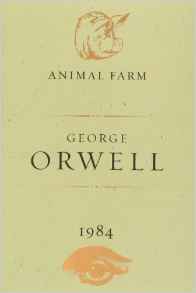 So, what didn’t work? Winston.  I can’t stand Winston.  He’s not the type of guy I would choose to hang out with nor do I really appreciate.  He starts the book off giving off the vibe that people owe him for his terrible life.  Winston, everyone around is having a terrible life! You aren’t any worse off than your comrades! If you’re that angry, than fight back!  I thought he was going to rally when he started writing in his journal, but that takes a backseat to his fling with Julia. It was also odd that he’s able to understand how and why the Ministry of Thought is able to torture him, yet he’s not able to out-game them. How can you be so self-aware and to know what O’Brien wants from you and yet you can’t deliver the results?  It’s torture.  You can lie to them and it doesn’t make you a bad person. I might have been able to forgiven him, had I not felt that I was supposed to like Winston.  I don’t know whether I felt that due to Mr. Orwell or the reviews I’ve heard from others.  Maybe it’s both.  Either way, it killed my interest in Winston.

Then we have Orwell’s woman problem.  I’m very uncomfortable with the way that women were depicted.  Winston feels that Julia owes him sex since he’s interested and she’s beautiful.  It gets to the point that he has rape/snuff fantasies about her. He even tells her this and she just brushes it off!  Julia, you’re smarter than this! Mr. Orwell doesn’t give much description of men throughout the book, but he gives a lot of description of women. He describes their weight, breasts, hips, and how firm their bodies are.  By the end of the book it just was too much and so necessary; there’s no relationship between how the women look and the relationship to the plot.  They seem to just be objects for the men in the story and have no agency or purpose.

I think there’s better books out there, but this does deserve it’s place on the political dystopian shelf.