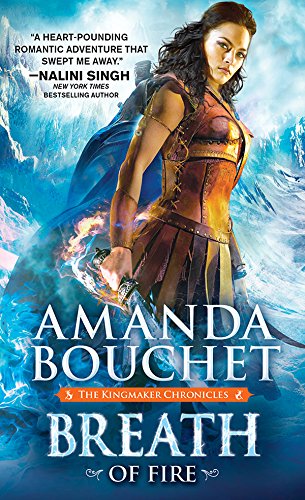 This is Book 2 in the Kingmaker Chronicles series and you ABSOLUTELY MUST read them in order.  There is so much you will be missing if you don’t read A Promise of Fire first.  I’m going to try and review here without major spoilers for either book.  I really loved the first book, and enjoyed this one quite a bit, but definitely not as much.

Book 2 picks up immediately from where the last one left off.  Cat and Griffin have made promises to each other, and then Griffin suddenly finds out Cat’s real identity.  They have a big fight and then get over it super quickly.  Griffin gets a little violent (not directly at Cat) and Cat completely shuts down and (I believe) overreacts.  I really hated this start to the book, and it left a sour taste for a long duration of my reading.

The first novel was the story of Cat and Griffin meeting and Griffin convincing Cat that the plan he and his family were implementing in the Sinta territory could be expanded to the other two territories of their world.  Book two is how they go about taking over Tarva, the neighboring territory.  There is a quest at the beginning and then a competition reminiscent of The Hunger Games.  There was less discussion of political strategies and more pure action.  This one was more Cat’s story alone.  Griffin was there, but she was also making family connections with others and learning more about her magical powers and her own abilities as a leader.  The action sequences are very well paced, and the second half of this one is a sprint to the finish.

Cat lost some of her hard exterior that was integral to her character in the first novel, and I kind of missed that about her, but I suspect it is necessary for a proper character arc over the whole series.  Cat was mostly a solo woman among men in the first book, with a few short exceptions.  This remains the case (maybe even more so) in this book.  It didn’t particularly bother me, but the ending sets up a bunch of female relationships/allies for her, and that makes me particularly excited for the next book.

There were some really great quotes that are very timely, and I appreciate them beyond belief right now and have to share them with you:

“Real freedom is answering to only yourself, and being responsible for no one.  Since that’s a moral vacuum, none but the truly wicked are ever truly free.”

“…a corrupt, oppressive system should be challenged.  And changed.”

“Unfortunately, ambition isn’t limited to the noble and sane.”

I read novels to escape, and this isn’t quite as much escapism as I normally prefer.  But it is speaking the language of our times.

I was spoiled by reading the first two books basically back-to-back.  It looks like the third book is still a year away from release, so I will have to be patient.