> FAQ Home
> Genre: Fantasy > Everything You Want in an Urban Romance

I maybe screeched a bit while reading this the other day. It was so ridiculously good I could not keep a hold of myself. You get action, interesting new characters, new information about how the Innkeeepers mete out justice, and oh you get a really nice love scene (finally some of you are saying!) which was great. This whole thing was way too short for me. I needed more and felt really upset when we got the final page. The only thing I wish we had gotten more of was colored photos inserted in this one. I was disappointed a few scenes were not included that I thought would have looked spectacular in the final book.

Dina is coming to terms with Sean being back on Earth and her doing what she can to keep raising the stars for her inn. She’s still hoping someone will come to her inn who can shed light on what happened to her missing parents. Being awoken in the dead of night by Sean hanging about, they find an alien being that is almost discovered who comes to the inn delivering a message from Dina from her sister Maud asking for Dina to please come and get her. With that we have Dina calling Arland (you know who he is) for help and off the threesome go to an almost desolated planet. 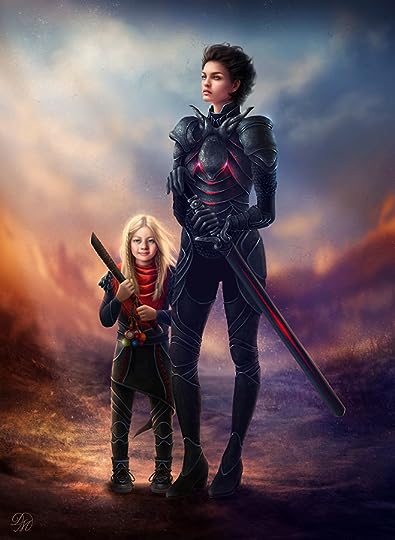 What can I say people. I maybe fangirled the entire time while reading this. I was a bit eh regarding book #2, but that’s because I thought the whole thing had a lot going on (characters from previous series) and part of me thought that Dina needed to push back more than she did once she realized she was being manipulated. Book #3 definitely showcases Dina’s strength and even though she finds herself in love with Sean (and denying it, badly) she isn’t going to let him push at her to do what he wants like she’s some weak woman who just takes orders. We get to see how kickass Dina is throughout this whole book. And I got an even better understanding of her powers (yeah baby). I want to be an innkeeper so bad.

Sean I enjoyed a lot more. Still not my favorite male character (he is third behind Curran and Arland) but he definitely is given more to do in this book and not just be some foil for Dina. I could see how their relationship would work though I agree with Dina, he needs a cloak. Come on dude. Wear a cloak!

Dina’s sister Maud is now my new favorite in this series. Seriously. She is number one, with Arland as number two, and her daughter Helen number three. We need spin-offs people! Spin-offs. Because the little taste we get to hear about Maud and Dina growing up was not enough. I need some prequels. Also Maud reminds me what Kate Daniels would like like if she fell for a vampire and had a kid. She was fantastic. Can I keep going on about Maud? I am going to keep going on about Maud. I sympathized for her and wanted her to bring her husband back to life so she could punch him in the face. I definitely get why Maud was down on ever having a relationship with another vampire again, but her husband sucked.

We get old favorites such as Beast and Caldenia. And of course we get Dina’s new cook, Orro whose recipes need to start being included in these books. Don’t care if they are fake, it would be hilarious.

The writing and plot for this one for once was quite easy to get through. The last book left me so confused at times. We have Dina off to get her sister and niece and the next thing you know the whole group when they return to Earth are also involved with the possible eradication of an alien species. The ending to this made me dance with glee (I needed pictures people!!!) and I wanted to maybe go in your face to the big bad in this one. As I said above, I just really wish for more pictures. I got this via Amazon Kindle and my new Kindle Fire HD is my favorite thing right now. I was worried though something was up since I wasn’t seeing any pictures. I realized though that the book only really had two pictures inside of it which left me a bit disappointed.

The flow was great and I have no comments about it. I just wanted longer and longer and more information. I don’t know how I am going to wait for book #4 and hopefully the meet up with Dina and Maud’s brother.