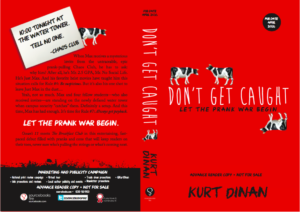 One of my students recommended Don’t Get Caught to me and said it was pretty great.  I’ll say that it was pretty ok. I enjoyed it well enough but I’m definitely not quite the audience for it anymore. I guarantee that had I read this in high school that I would’ve tried to start my own Chaos Club myself…but now? Not so much.  Here’s some basic plot stuff:

Max is pretty much a blend in kind of guy which is kind of good (he doesn’t get picked on) but kind of bad (because no one notices him).  One day he receives an invitation from the Chaos Club (a 40 year old secret prank society that is by invitation only) to meet at the water tower on campus at night.  When he arrives he’s surprised to find four of his classmates also there.  What they don’t know is that they have been set up for a fall and they are all quickly taken in by the police for defacing the water tower.  But watch out Chaos Club, Max and his newfound friends aren’t going to take this lying down.  In fact, Max is a big fan of heist movies and he uses his knowledge to get his group to work like clockwork together to set up the Chaos Club throughout the year for some of the most outrageous pranks the school has seen in the hopes of flushing out the secret members and finding out why they were set up.

The book was pretty good.  The pranks were fantastic but of course, if it was real life those kids would’ve been arrested and charged because the days of pranks and being a rapscallion died in the ’80’s. I really enjoyed all the heist rules  that Max shares with us and how he gets his group to run…although he forgets to listen to one of his own rules!  I’m assuming that there’s going to be another book because we’re left with a pretty big twist but no explanation for it.  That was what kind of threw me off because it’s kind of a big deal and then the book just ends…open ended enough for a follow up book but not for an actual ending.  So let’s hope there’s another!  I’m always happy when my students offer me things to read or watch and this was yet another fairly solid recommendation!  So if you’re looking for a little fluff and you want to go back to high school (gross, kill me), the book is a fairly good way to waste a little time.

update: I just scoured Goodreads and it looks like the author is “hoping” to write a second book but there’s no real plans for it.  WEIRD.