So I got all whiny about Vol. 3, which is the trade published right after Lumberjanes transitioned from a limited series to an ongoing one. I wasn’t quite sure how to feel about it. They changed the artists all around (I hate when comics do that), and the story felt less silly and frenetic. It wasn’t bad, just different. But Brooke Allen is back as the artist here in Vol. 4 (hooray!), and the story felt more like it did in Vols. 1 & 2 again, except with slight differences (there would have to be, for it to keep being ongoing; it’s a different kind of writing to sustain a long story than a short one). 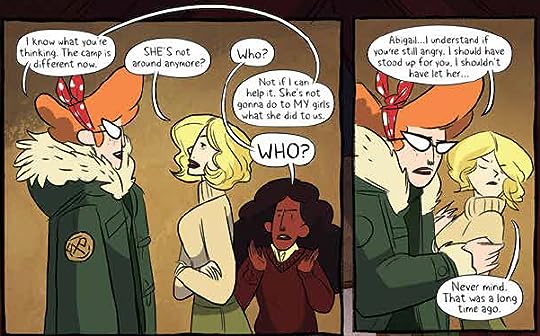 We also get some tantalizing backstory on the camp; what it means to really be a Lumberjane; the mysterious camp director, Rosie (who is a badass); and the Bear Woman. 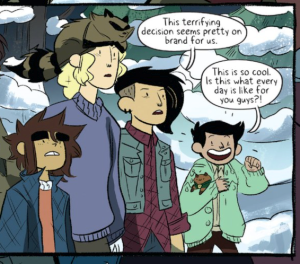 The real backbone of the story, though, is all the younger Lumberjanes coming together to rescue their camp counselor, my beloved Jen. Jen is seriously my favorite character. I don’t know why. Maybe it’s something to do with how earnest she is, and how fond of rules, but underneath she is A WILD WOMAN. So they’re all out camping, in the middle of summer, and it starts to snowstorm for no reason at all, and they are attacked by antlered wolf monsters. Rosie comes to the rescue (on a giant moose), but Jen gets left behind. Only, she’s rescued, too, by a woman named Abigail who lives in a giant hidden house in the forest.

Rosie forbids the Lumberjanes from going after Jen, especially since Rosie knows Abigail from years ago, and she definitely knows way more about what lives in the forest (and what’s up with the camp) than they do. But Friendship to the Max!, and who cares about rules. They love Jen. They are going to rescue her. It is a tale of revenge, being lost in the snow, and monsters who aren’t really monsters if you look at them in the right light. 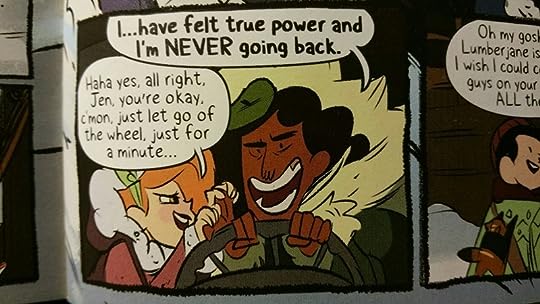