> FAQ Home
> Genre: Non-Fiction > “To quote one Valley sage, if your idea is any good, it won’t get stolen, you’ll have to jam it down people’s throats instead.” 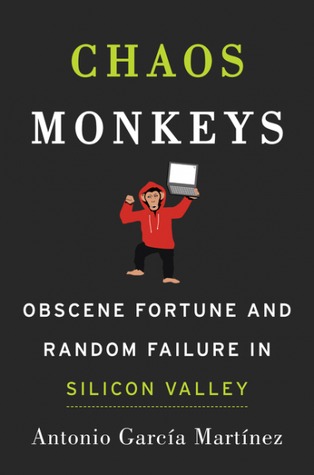 Chaos Monkeys brought to mind a couple of other books I’ve read recently, as it deals both with Silicon Valley (like Disrupted: My Misadventure in the Start-Up Bubble by Dan Lyons) and the broader state of Wall Street and the stock market (The Big Short by Michael Lewis). Those two other books, however, both benefited from writers capable of making such dry material seem interesting and relevant. While Antonio Garcia Martinez spices up Chaos Monkeys with stories about his own personal life, they tended to revolve around the woman he accidentally got pregnant (…twice) and drunk driving, and failed to make him very likable or interesting.

“Here’s some startup pedagogy for you: When confronted with any startup idea, ask yourself one simple question: How many miracles have to happen for this to succeed?”

Chaos Monkeys starts with Martinez describing his initial years on Wall Street, and his time with the advertising team at Facebook. He eventually becomes the CEO of his own start up, the creation of which takes up most of the book. He also fought a lawsuit while creating the new company, and goes into great detail about how that affected his funding. It’s basically a lot of “we did this, then met with this guy, then did this” kind of writing. He throws in insights into Silicon Valley that I did find interesting, especially after recently reading Lyons’ book, but most of it’s so dry that I had trouble staying awake. And while the jacket makes a big fuss about what a rebel he is outside work — “He also fathered two children with a woman he barely knew, committed lewd acts and brewed illegal beer on the Facebook campus (accidentally flooding Zuckerberg’s desk), lived on a sailboat, raced sport cars…” — I didn’t particularly care about any of it.