> FAQ Home
> Genre: Fiction > Why do I punish myself and continue to make myself finish books I’m no longer interested in? 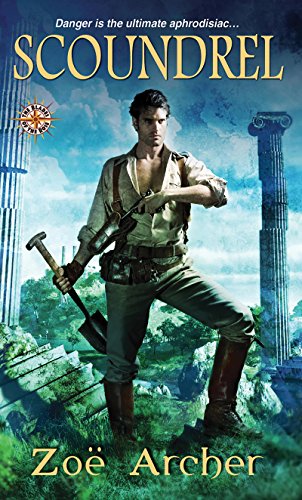 This is really more of a 2.5 to *maybe* a low 3 star book.  This is the second book in the Blades of the Rose series.  I was really surprised, but I did not like it nearly as much as the first.  When reading the description this one seemed way more up my alley, but it didn’t pan out and took me absolutely months to finish reading it.

I’m going to plagiarize myself a little bit from a prior review to give the setup: Bennett Day is a member of the Blades of the Rose, a group dedicated to protecting Sources, which are inanimate objects that hold all the magical power of the world. The Blades are fighting against the Heirs, a group of British aristocrats who are trying to gain control of the Sources and bring the entire world under British control.  Bennett is tasked with finding and securing the Source known as Greek Fire.  London Harcourt’s father is an Heir, and is also searching for Greek Fire.  London is the epitome of everything a Victorian lady should be, with the exception of her skill with languages, particularly her ability to read ancient Greek dialects that no one else knows.  London’s father has kept her in the dark about the Heirs, but he drags her to Greece to use her language skills to puzzle out where the Source is hidden.  Bennett and cohorts quickly convince her of her father’s evil ways, and she joins them to assist them with their quest.

This story just did not resonate with me.  I liked the secondary romance much more than the first, and wished we could see more of those characters.  I didn’t think the main characters were as well-realized as those in the first book. I am never really thrilled with the reformed rake trope, and that continued to be the case here, and London went from sheltered Victorian miss to adventuress awfully quickly.  These books read like action movies, and I am mostly ok with that, but I think I have to be in the right mood for it.  The pacing was a little uneven in this one too.

And now, I’m going to say something truly shocking:  there was too much sex in this book.  Usually when I see someone say that in a review shake my head at them.  But, I stand by the statement here.  This is an adventure story.  They are being chased by evil magicians and running into mystical creatures along the way, all while having to scale cliffs and solve puzzles.  I can absolutely see falling in love as the characters take on these challenges together.  Can I buy the characters stopping in the temple ruins to have sex while all of this is going on around them?  No.  No I cannot.  I just wanted to scream at them to pay attention to the danger they were in and do the job they were there to do.

With all that said, I am planning to read the other two books in the series.  I think they can each be read as a standalone, but I’m going to power through in order.  I already own them, and I’m particularly looking forward to the last one.