Rogue hero Jack Stratton is back in another action-packed, thrilling adventure. While recovering from a gunshot wound and the loss of his job on the police force, Jack’s romance with feisty Alice (aka Replacement) continues to develop. When Alice gets a seemingly harmless private investigation job–locate the owner of a lost dog–Jack grudgingly assists. Little do they know it will place them both in the crosshairs of a merciless serial killer 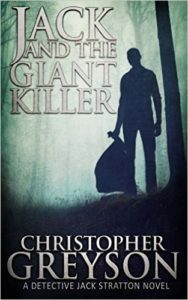 I … didn’t hate this. I know. I know.  I usually only seem to read books I hate, but sometimes I like them! Sometimes I love them. And sometimes they’re “Just Okay”. Like my mom says “It was words in an order I hadn’t already read before, so that was nice.” I’m probably paraphrasing.

When I picked this up I didn’t know it was in the middle of a series. It was recommended on Bookbub and the blurb was slightly different. It was free for Kindle Unlimited and it sounded interesting. And it is!

A really tall guy is at the dog park with his really big dog when he’s lured away and murdered. The dog, wanting to protect her owner, gets away and tries to help him. He’s taken away in a car though, and so she gets lost.  Replacement is hired to find the dog’s owner. They do it right! She and Jack take the dog to a shelter to have her checked for a microchip. They take the dog home with them rather than leave her there, but leave their contact information in case anyone reports the dog missing.

The investigation into the whereabouts of the dog’s owner lead them to find out he’s been murdered.  Because Replacement is a PI, she doesn’t want to let just the cops handle things, so they keep sleuthing. There are red herrings, a few dead-ends, and they realize that the dog’s owner wasn’t the first “giant” to be killed. THEY IMMEDIATELY TAKE THIS INFORMATION TO THE POLICE. Whaaaaaat?  Seriously, how often does that happen in the world of fiction?

More dead ends, a few more misdirects, and a needless side-plot about a childhood trauma from Replacement’s past resurfacing (TW: child molestation only mentioned as a thing that happened, with no details). It felt shoehorned in and as far as I can tell, isn’t integral to the next book in the series.

Jack’s relationship with Replacement is really well written. It’s at the new stage and they’re still adjusting to each other, but their interactions feel pretty natural and normal. It’s not romance-novel stuff. It’s not stilted. It’s two friends who realize they’re attracted and are still negotiating it.  Replacement is also a pretty cool character. She’s tiny and cute, but not helpless. She’s got computer skills (she does freelance web design and freelance private investigation work because neither brings in a lot of money). She can hold her own in a fight, and she’s funny. There’s a few places where the character falters a little (she gets way too upset when she thinks Jack’s going to a strip club for fun) but overall, I’d consider reading a book with her as the main character.

I wouldn’t call this a “cozy” mystery, but it’s mild. There’s no sex. There’s not a lot of swearing. There’s a flashback to Jack’s military service where he stops a member of his unit from attempting to rape someone and of course a few people get murdered but it’s light on the gore. It’s also got an obvious Christian slant to it, but not in a preachy way.  Replacement makes Jack say grace before meals. The only other time it’s apparent is in the characterization of Jack.  Jack, a bounty hunter, ex-military, and former policeman, doesn’t drink, smoke, look at pornography, or go to strip clubs. It’s made incredibly clear that he has never done any of these things.  I know those aren’t bad things, but it just feels creepy to me. Your mileage may vary.

One last little warning: there’s a few instances of a dog in jeopardy, but she comes out OK.

Three stars instead of four, because the whole “pure hero” thing makes me side-eye.