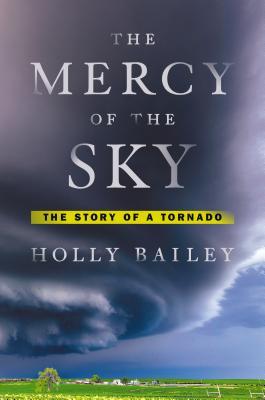 I’ve always been fascinated with natural disasters, tornadoes in particular. I’ve lived my whole life in north Texas, in an area that sees a lot of impressive thunderstorms and tornado warnings, but rarely any actual tornadoes (although that insane F4 that hit Garland, Texas last Christmas was only about 15 miles from my house). That’s allowed me to see the nifty parts of the storms without ever really suffering any damage. I’ve been really, really lucky.

The people of Moore, Oklahoma have a lot more respect for and fear of the nature of tornadoes than I do, and rightfully so. Moore has seen 10 tornadoes since 1998, three of which caused catastrophic damage and loss of life. Holly Bailey’s The Mercy of the Sky focuses on the most recent: May 20, 2013. This tornado was unusual not only in size, but in its timing — it hit mid-afternoon, when most of the town was either at school or work. Bailey leads the reader through the events of the day, focusing on a few main “characters” — two weathermen, a few school administrators, and others who had not only the burden of worry about their families, but the responsibility for their fellow residents as well.

This book hits hard. The chapters describing the kids at the schools broke my heart. The teachers did everything to protect their kids, in an old school with no storm shelter and not enough protection. These were elementary schools, filled with terrified little children and teachers who cared for them with all their hearts. One teacher, pregnant at the time, lost six kids from her class, and almost died herself. Six kids. I had to keep putting the book down because I was in tears, and then picking it right back up to find out what happened.

Bailey’s point of this whole book, in addition to telling the stories of these brave people who lost so much, was how unprepared the city was, despite its long history of such storms. None of the schools in Moore had storm shelters. The two that were destroyed in the storm were rebuilt with storm shelters, but the state government refused to pay to retrofit shelters on the existing schools. Many homeowners either couldn’t afford shelters of their own, or their land was unsuitable for them. Bailey also touches on people like me, who blow off such warnings and head outside to see the sky. I’m not saying that I won’t continue to do that…but I know this book will be on my mind next tornado season.