Registration Is Open! Sign Up Today
> FAQ Home
> Genre: Fiction > The Answer is 42

I’ve been looking for a science fiction text to read with my Sophomores.  Hitchhiker’s Guide to the Galaxy is one of those books that ends up on sci-fi book lists.  Plus those that like the book REALLY like the book. 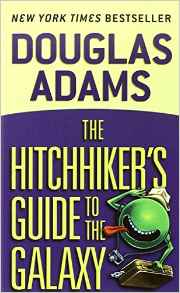 comes and destroys Earth.  The rest of the novel is the exploits of Arthur and Ford as they encounter a galactic politician, Zaphod, who’s out to get rich.  This is a series so the first book ends leaving room wide-open for the sequel.  Throughout their journey they actually refer to the hitchhiker’s guide to the galaxy.  Which is a guide written in a wiki-style by authors all over the galaxy and is housed in what we’d call today a first generation Kindle.

One of my favorite characters is Zaphod’s cynical robot, Marvin.  Everyone hates him because of the cynicism and this just adds to his own hate for himself.  He adds a nice dose of dark humor to what can sometimes be very snarky humor.  Speaking of humor, if you like British humor then you’ll really like this book.  If you don’t like British humor, you’ll not.  There’s a lot of on-the-nose puns and jokes, and while it’s not my favorite it’s at least entertaining.

It feels like the “point” of the book is to look at how technology doesn’t really make civilization any more advanced.  It just adds bells and whistles to the follies that are present wherever people are trying to build a better life.