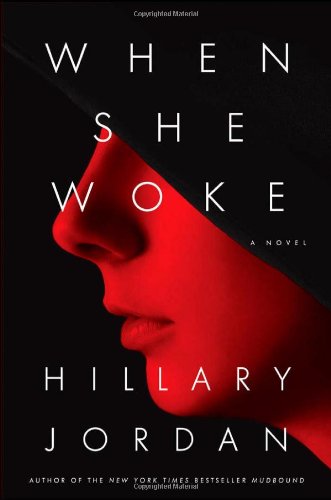 This book is such a missed opportunity.

When She Woke takes place some time in the future, in a dystopian United States where religion now supercedes politics. Hannah Payne has been arrested and charged with murder after she gets an abortion. Her punishment is “chroming”–her entire body is dyed red, signifying she is a murderer (Chromes can be yellow, orange, red, blue, green, or purple depending on their crime). It’s hard to say what this book is about, because a million things happen to Hannah before the ending. It’s a futuristic version of The Scarlet Letter, with a heaping helping of The Handmaid’s Tale thrown in. There’s a scary religion, misogyny, a creepy headmistress, threatened rape, a type of Underground Railroad for women who have had an abortion, a road trip–I mean really, there’s like eight different stories in here. I think Hillary Jordan had some trouble deciding what she wanted to write about.

It’s too bad she didn’t focus in on the chroming. It would have been fascinating to explore what it’s like to be a criminal in a world where you are so clearly marked, and everyone knows what your crime is. I would have loved a book that explored the underworld that Chromes live in, and how they survive in a society where everyone is openly hostile to them. Hillary Jordan creates a pretty interesting world, but then she barely skims the surface of what it’s like to live there. There’s also this weird scene at the end of the book that rings false, and some loose ends left hanging. Just read The Handmaid’s Tale instead.