Registration Is Open! Sign Up Today
> FAQ Home
> Genre: Fiction > These girls are all my squishy muffins.

I didn’t quite love this second volume of Giant Days as much as I did the first one, but this is still an unbelievably fun series and I can’t wait for Vol. 3.

Vol. 2 covers issues #5-9 of the series, from a winter ball through exams, dating crises, and what happens when you watch too many episodes of Friday Night Lights in a row. Crotchety Susan is for once the only one having reliable sexytimes, while Daisy is going through a questioning phase, and Esther is having . . . issues. Ed continues to crush hopelessly on Esther, and McGraw continues to be have a moustache.

I did find some of the stuff that happened in this one . . . bizarre. In the first issue, Susan gets SPOILER locked in an office for exposing a faith healer in her hometown as a fraud, and the others have to come rescue her. This does involve a very amusing couple of incidences involving McGraw and a multi-tool, and Esther unleashing her drama on an unsuspecting dance floor, but it was still weird. Also, Daisy starts channeling Tami Taylor?? END SPOILERS There were other little things as well, on the more cartoonish end, but they were so small I only really noticed them because I was so weirded out by the other stuff. 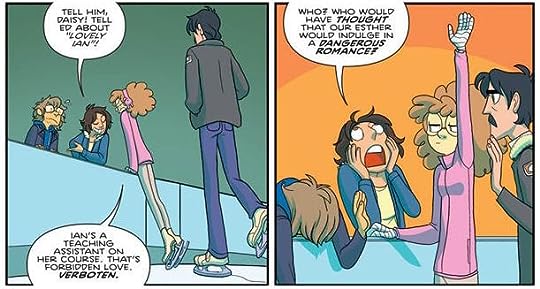 The thing that really knocked this down a star for me may just be my problem, I don’t know. The artist for the first entire trade, and the first two issues of this one, was Lissa Treiman, and it is one of the best parts of the comic. Her characters are so expressive and unique looking, and they have huge personality. Starting with issue #7, Max Sarin takes over, and it’s not like his art is bad. In fact, it’s not at all. It’s just not the art I wanted.

Am I the only one who gets supremely annoyed when comics change artists? For me, the art is inextricably linked to the identity of the comic, and when you take that away, it’s like it’s a whole new comic, and I hate that. I hate it so much, you guys. And I love it so much when comics have the same artists for the whole series, like Fiona Staples on Saga. I mean, imagine that series without her. You can’t! I don’t get it. Why does this happen. Does it annoy it anyone else as much as it does me? 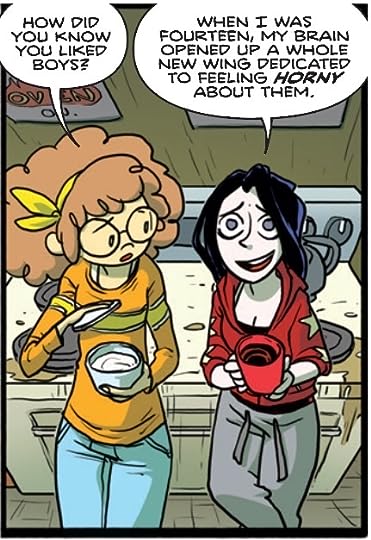 Anyway, I suppose I’ll get over it. I have to. I like the series too much to let a change in artwork deter me.