Registration Is Open! Sign Up Today
> FAQ Home
> Genre: Science Fiction > If only I’d read this right after the others 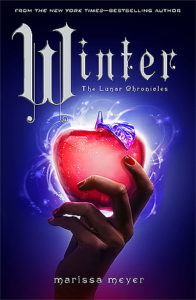 Winter is the conclusion to Marissa Meyer’s Lunar Chronicles and neatly wraps up the story in a tidy little bow, maybe a bit too tidy if I’m honest. I’m not exactly sure what happened here, but I did not enjoy this entry as much as the previous books in this series. I blew through the Lunar Chronicles sometime last year and thought they were excellent YA, but I had been putting of reading this one and ended up skimming through most if it and outright skipping huge swathes of it.

As a final novel in the series it’s hard to lay out the plot without getting spoilery. Cinder and her team of rebels are finally facing down the evil queen Levana and instigating the civil war that has been coming for four books. That’s it, and perhaps that’s the problem. While there are a lot of side plots as people get rescued, and then captured and then rescued again or start mini-rebellions only to find themselves overwhelmed by the superior Lunar forces, there just isn’t that much to this book. It just feels very predictable.

There’s also the problem of too many point of views. I think Meyer wanted to give all of her characters screen time, but they dragged the plot down and actually highlighted how flat the characters were. Also, Cinder’s prince, whose name escapes me, is boring and his POV chapters were both completely unnecessary and utterly boring.

Another issue I had is that the Lunar ability to manipulate people was exposed as kind of ridiculously overpowered, and perhaps badly thought out, through the overuse of it. It was terrifying in the first few books, but as this book was set completely on the moon and we dealt with the Lunar people, the power just became ridiculous and exposed a weakness in Meyer’s world building.

Honestly, I think this is a completely skippable finale and would have been much better with some heavy editing.