> FAQ Home
> Genre: Fiction > If Charlotte Bronte and Al Swearengen Had a Child, It Might Be This Jane 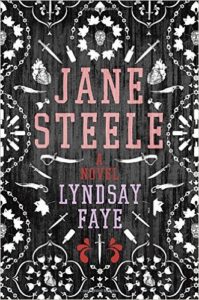 It’s hard not to like a book that starts with a quote from Jane Eyre and a murder.  Though Jane Steele, a novel by Lyndsay Faye, didn’t rock my world as much as I had hoped, I did have a good time reading it and I definitely recommend it both if you are a fan of the original Bronte novel or even if you aren’t.

It took me a bit to warm up to this Jane—partly because I couldn’t figure out how seriously to take her (or that is, how seriously I was supposed to take the whole story).  Also, the term “serial killer,” was bandied about in various blurbs on the dust jacket but thinking of this Jane as a kind of 19th century Dexter didn’t work for me.  Instead, this Jane uses her own re-reading of Jane Eyre to frame her personal story—one that shares a number of features with Charlotte Bronte’s tale but also branches out in some delicious ways—involving everything from penning “last confessions” for criminals about to be hanged to Sikh warriors to yes, a few murders (but each of the victims really had it coming).

Jane Steele’s story begins much like that other Jane’s—orphaned and dealing with mistreatment at the hands of her aunt and cousin and then sent off to a boarding school, where the girls are literally starved into passive obedience.  However, this Jane, like her name, is sharper, and steelier and the result is a growing body count.  A few years later, Jane is making her way in the world by her wits and writing skills when she learns that her aunt has died and a new master, Charles Thornfield, has taken up residence at Highgate House.  Jane believes that she might be the rightful heir to this property, so she changes her name to Jane Stone and takes on the role of governess to Thornfield’s nine-year-old ward.

This, to me, is where the fun really starts and where this novel deviates in the best ways from Jane Eyre.  Yes, there is a young ward.  Yes, there is a mysterious part of the house that Jane is not supposed to go in.  Yes, she has a strong attraction to Mr. Thornfield.  However, Faye makes Mr. Thornfield come from a different British colony, sets up a different mystery and provides a household staff with just as much backstory as Jane.  There are hints at the end that this book might be an origin story of sorts and I think that further adventures of Jane Steele, separated from the shackles of Bronte tale, might be even more enjoyable.