I don’t quite know how to rate this one, because it’s so different from the first two volumes. I’m pretty sure this book marks the occasion of Lumberjanes being made from a limited run series to an ongoing, so changes have been made accordingly, and I’m not quite sure how I feel about all of them yet.

The most notable thing of course is that the series has a new artist. Actually, two of them (plus several guest artists in the first issue collected here, which features all the girls telling ghost stories that are then drawn in various styles). This means a new color palette, and new ways of drawing the characters. It’s a little bit toned down, less bright and frenetic, less crowded.

Actually, that describes the book as a whole. And you know what, I miss the freneticism, the almost schizophrenic action and quick cuts, and so much random plot happenings shoved into four small issues. It was more cartoony, but it also felt more quick and fun. 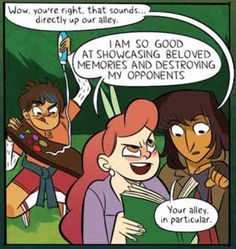 This new approach is probably smart, though, if the series is shooting for longevity. Spending more time on individual stories, calming the tone down so that you can get to know each girl more, and each weird storyline gets its due.

And its central weirdness is still present, even if it’s calmed down a bit. A woman who can turn into a bear is still a central plot point. Mal and Molly get sucked into an alternate world full of dinosaurs. Meanwhile, April, Jo and Ripley spend a full day trying, and failing, to be normal. It feels a bit like treading water, but it’s also pretty amusing.

In all, it feels like Lumberjanes had to rethink its identity a little bit, and is still finding its feet. I’m confident it will, though. Volume 4 comes out in just a couple of months, and I’m so there.