> FAQ Home
> Genre: Non-Fiction > When You Don’t Have A Lot of Time Left 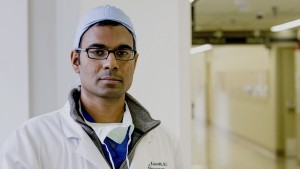 Last week one of my city’s neighborhoods had a huge explosion, leveling three businesses and damaging three dozen more. On Friday my husband and I went there to meet up with friends and spread some local economy love, cash-style. We wandered into a (mostly) used bookstore called Couth Buzzard (plywood still covering nearly all of the windows) and this book just jumped out at me. I ended up reading it in one day because I could not put it down.

Dr. Paul Kalanithi was 36 years old (my age – which, given the subject matter of the book, really drove it home to me) when he was diagnosed with terminal cancer. He and his wife (also a doctor) were sorting out their next steps, as he was basically a superstar, about to finish up the last of his education and essentially write his own career check. Instead of a dream job, he got appointments with an oncologist.

This is different than other books I’ve read written by people with terminal diagnoses. Dr. Kalanithi majored in English literature and earned a Master of Philosophy before pursuing his medical degree., which translates into a fantastic ability to tell a story. And as dire as those of us who haven’t experienced might imagine his situation to be, the story isn’t exhausting. I didn’t find myself crying during the main part of the book, just during the epilogue, written by his wife, which was lovely and brutal.

Instead, I found myself thinking. Contemplating. Really trying to figure out how I would handle trying to sort out what to do with my life when I knew it was going to end sooner than I always thought, but not knowing exactly how long that might be. How do you go from looking thirty years in the future to wondering if you have one year, or five, or maximum 10? What would your future look like and how would you sort out your values? If you had one year, maybe you’d quit your job. But what about five?

The book doesn’t give us answers. There aren’t sweeping statements about how to live your life that you could see stitched on a sampler. I genuinely believe there is a place for books like that, but I think books like this are so needed to.