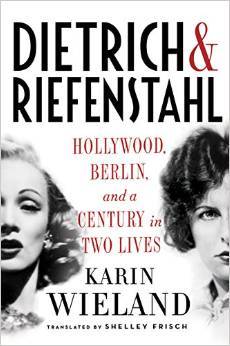 In Dietrich & Riefenstahl, Karin Wieland compares the lives of two famous German movie personalities. On the surface, Marlin Dietrich and Leni Riefenstahl seem very similar. Born a year apart, both harbored big dreams. Both defied their parents, studied dance and worked as actors. Both took lovers and refused to live their lives the way others demanded.  But when Hitler ascended to power, the two women reacted very differently. Dietrich became an American citizen and entertained Allied troops during the war, and Riefenstahl supported Hitler, directing some Nazi propaganda films.

The major problem in this book is the author’s complete antipathy for one of her subjects. Wieland clearly adores Dietrich, and paints her as an alluring and moral person the whole book, skating past her addiction problem and the fact that she apparently made her husband’s lover have multiple abortions so she could pretend to Hollywood that she was happily married. She takes her side, even when it’s unnecessary-arguing that Dietrich was better than Greta Garbo. Also, Wieland is apparently a time-travelling mind reader, able to tell the reader when Marlene is tired or lonely or when her feet are particularly sore.

And where Marlene can do no wrong, Riefenstahl can do nothing right. Even before Leni is born, Wieland is gunning for her, writing that the Berlin neighborhood where she was born “reeked of confinement, adversity and desolation.” She’s somehow able to read fear and anxiety on the 5-year-old Riefenstahl’s face. About a picture of Leni as a teenager, Wieland writes “She’s smiling uncertainly into the camera, but it is easy to tell that she is enjoying the display of her body.”

She’s full of disdain for Leni and look-that’s mostly fine.  Riefenstahl was not a good person. She threw in her lot with the Nazis to get her films produced, and didn’t give a damn what happened to anyone else.  Near the end of the war, she began shooting a movie called “Lowland” where she played a Gypsy named Marta. Needing some Mediterranean-looking extras, she rounded up some inmates from a concentration camp. When she was done with them, they were transported to Auschwitz. After the war, Leni claimed she had seen all her extras again, but that was a lie. Riefenstahl spent decades suing anyone who accused her of knowing what the Nazis were up to. She downplayed how much she knew Hitler. But in Eva Braun and Joseph Goebbels’ diaries discovered much later, she’s described as being friend to high-ranking Nazis and as someone who danced with the Fuhrer at parties. So she wasn’t a good person. But I was still surprised by Wieland’s venom for her. Our author is so determined to paint her as a talent-free, anti-Semitic, social-climbing adventuress that I started to feel a little bad for Miss I-Had-No-Idea-What-Those-Nazis-Were-Up-To-Can-I-Make-My-Movie-Now. And I don’t really want to be Team Nazi Sympathizer.

In the end, Wieland’s perspective gets in the way of her book. She clearly wanted the book to be a moral showdown between good (Marlene) and evil (Leni) and she had no problem manipulating the facts to fit her conclusion. What’s the point of reading a history book when you can’t trust the history?Dietrich & Riefenstahl was frustrating, and all it did was make me want to read better books about Wieland’s subjects.