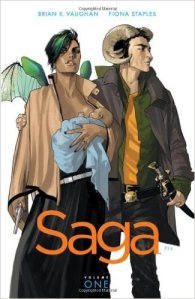 when my sister-in-law brought the first three volumes over and told my wife and I we HAD to read it.  Wanting to get more familiar with the graphic novel world I was immediately interested in reading them.  Plus, it’s a sci-fi graphic novel and I’m a bit of a nerd when it comes to sci-fi/fantasy stuff.  I took the first volume and immediately got lost in the story.  I finished the first and immediately took up the next two and read them all in one sitting.  It was awesome.

This was almost two years ago and since then I’ve seen Saga become more and more talked about.  And for good reason!  The ultimate premise is that there’s this war between two neighboring planets.  The smaller planet is a people who have horns (horns of all types like sheep, goats, deer, antelope, gnu, buffalo, etc.) and who are able to channel magic.  Their antagonists are a winged people (whose style of wings range from insect to avian).  Almost like Star Wars their conflict has moved from just their two planets to all over the known galaxies.

Then we meet the protagonists. And by meet, it’s at the birth of their child.  She’s from the winged planet, he’s from the horned one, Alana and Marko, respectively.  Beginning in media res, we see that they are being hunted by the winged military, of which Alana once belonged.  As they escape capture we get flashbacks of how they met and what’s going on in the world around them.

The balance between Alana and Marko’s story and other plot lines is part of the beauty of this work.  This first volume sucks you into this world that you feel so familiar with, yet are still so interested to hear new facts.  In this balance Vaughan avoids the Romeo & Juliet trope, and thank goodness! And while we are speaking of beauty, the illustrations are off the chart!  Staples really captures the nuances of each individual and culture.  This is art at it’s finest!  I certainly recommend this if you are looking for a good absorbing read.  And now that there’s four volumes it’s like four servings of your favorite foods.