It’s 1914 in Paterson, New Jersey. Constance Kopp and her sisters Norma and Fleurette have taken their horse and buggy into town to do some shopping. Suddenly one of those newfangled motorcars plows right into them, damaging the buggy beyond repair. It’s a miracle the women themselves have survived with relatively minor injuries. People in the street help extricate them,  right the horse and retrieve the remnants of their ruined buggy. The driver of the motorcar is Henry Kaufman, who runs the family silk dyeing factory in town. He and his friends roar off before the authorities can be alerted, so Constance takes it upon herself to write to the man and ask for recompense for the damages. This sets off a year long ordeal in which the women are threatened, shot at and their home ransacked and nearly set on fire. 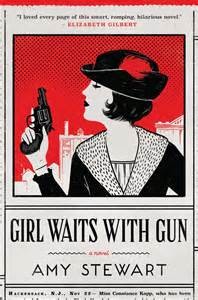 Based on real people and events, this rollicking novel tells the story from Constance’s point of view. And what a story it is. Weaving factual details within an extraordinarily rich and vibrant fictional style, we come to know Constance, her sisters and Sheriff Heath (the only lawman to come to their aid at the beginning) and follow them through the next year or so until Henry Kaufman is finally brought to justice for all the calamity he brought down on the women. Constance comes to take an even more active role in the case against Kaufman, learning to handle and shoot a gun, and even participating in sting operations. Spending time with these characters was a true delight and when Sheriff Heath turns to Constance after Kaufman has been convicted and sentenced and offers her a job as a sheriff’s deputy (supposedly one of the first) I admit I squee’d with joy at the prospect of this becoming a series. In an interview with NPR Ms. Stewart has said that she does indeed have more in store for us and I couldn’t be happier. Highly recommended.