Guys, I waited sooooo long to read this.

I originally put it on hold at my library SIX MONTHS AGO. It was “on order” for five of those months. I waited so patiently. And then one day I got an email from my library informing me my hold had been canceled, because they couldn’t find a copy of the book to buy for the library’s collection. BOOOOOO. Hisssssss. So I ordered it through interlibrary loan and waited another month. And then it arrived! There was much rejoicing.

And it ’twas good.

This book concludes the initial run of Kelly Sue DeConnick’s run on Captain Marvel before the ‘reboot’ with new art several months later. It also crosses over with her run on Avengers Assemble. But this is really Carol Danvers’ story. Nothing aside from character dynamics carries over from the Avengers (Carol is particularly close to Spider-Woman). What this really does is wrap up the story introduced for Captain Marvel in Vol. 2, “Down.” Her antagonist turns out to be an exiled Kree who is basically out for revenge, and doing terrible things to NYC.

As always, I must mention the art. Filipe Andrade was back for the last two issues, but luckily another artist subbed in before that so I didn’t have to sit through a whole book of that guy’s art. 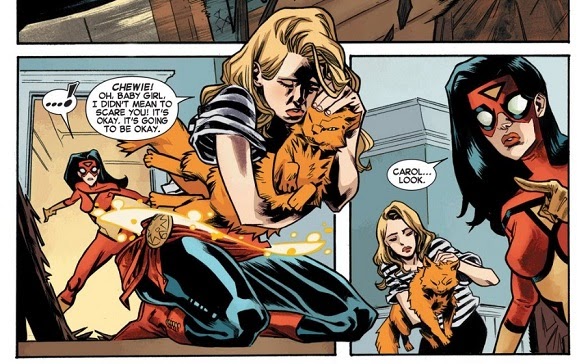 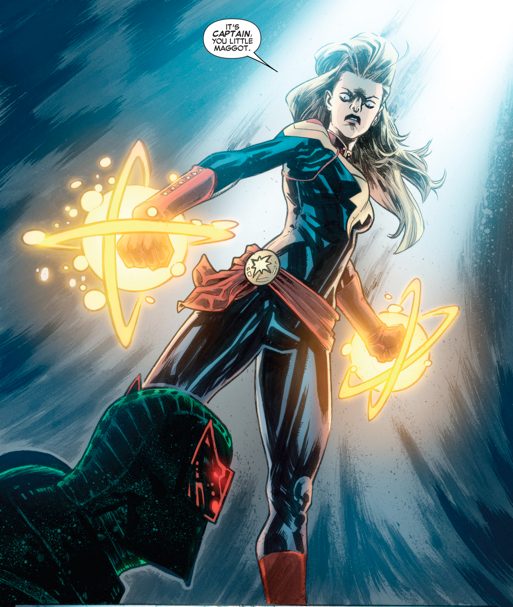 Very little of this: So now I am officially caught up on Captain Marvel. The next trade comes out September 1st! I think I am actually going to buy a copy this time. It shall be glorious.