Ody-C #4 is gross. Red and purple and brown carnage spills across its pages. It may be strange to call such gore beautiful, but there are many strangely beautiful things about this comic. As graphic as it is, particularly in the first few pages, it doesn’t feel like it’s played for shock value. I mean, the gore portrayed is about as disgusting as I imagine the lair of a carnivorous cyclops would be. Not that it’s something I imagine often.

In this installment we return to Kylos, where Odyssia and what’s left of her crew plan their escape from the Cyclops’ gigantic, carcass-filled troughs. Surrounded by dozens of their slaughtered comrades, those left alive fashion ladders out of the spines and ribs of the dead so that their sisters will not have died in vain. I won’t spoil the details of the escape from the Cyclops, but it shouldn’t be a surprise that Odyssia, at least, does escape to sail through the seas of space for another day.

Odyssia’s encounter with Poseidon’s one-eyed daughter comprises nearly all of this issue. Perhaps that is why I found it less compelling that other issues; it’s exciting, but the stakes feel pretty low because we already know, to a certain extent, what is going to happen. I found earlier issues that spent more time developing the new mythos more interesting, though less adrenaline-pumping. 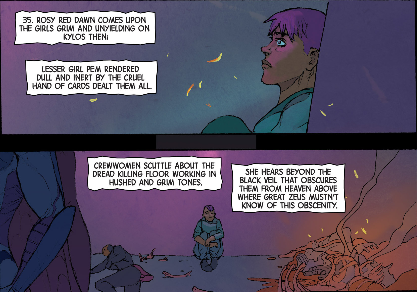 I think future issues will strike a better balance between what is new and exciting and the classic tale we are familiar with. Fraction has plans to integrate elements from other fables, which will add an interesting flavor to something that has the potential to grow stale very quickly. I like to think that all mythology exists in the same space. In fact, there is so much overlap among these stories that it’s almost impossible not to notice the similarities, and I’m glad that the Ody-Cteam is addressing those similarities and integrating foreign elements sooner rather than later.

The last seven pages of the issue deal with the aftermath of the crew’s adventure on Kylos. The schemes of Zeus and Poseidon take a surprising turn, and the Ody-C is left desperately hunting for a safe port. The place they find, or rather, the place that finds them, introduces readers to the character on the cover and reveals at least part of what they truly are. It bookends the comic nicely, though we have yet to see whether there are sinister or favorable things to come from this character. 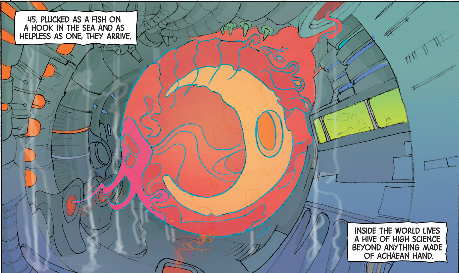 Ward’s art is stunning as always, but if you are of the opinion that his pages are too busy and tangled, then you will probably enjoy the organization of this issue better than the others. His layouts in #4 are less organic and more geometric, and there are two full-page illustrations that are far simpler than comparable pages in the first three issues. 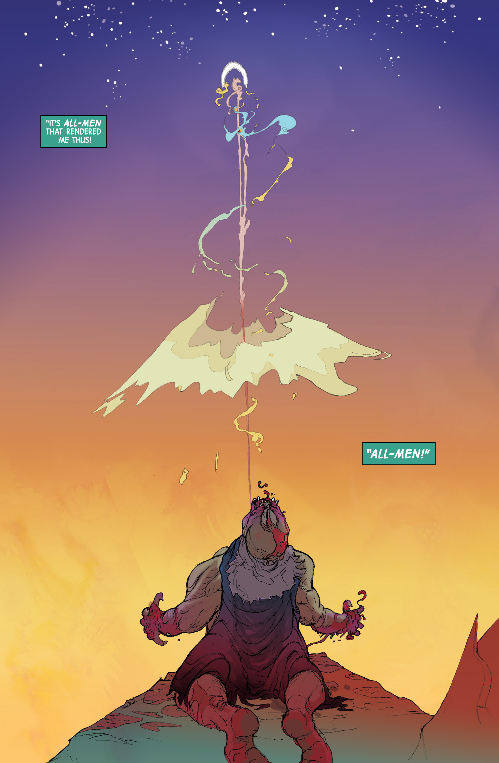 This page is stunning in its simplicity. Here, Ward grants readers a much-needed reprieve after over twenty pages of nonstop action. The final page of the issue, which I won’t include to avoid spoilers, is also relatively pared-down. It performs a similar function, essentially the cool-down period after the mental workout of the rest of the issue, but its stark clarity also heightens the revelation of this final page.

Fraction also seems to have taken a note from Bitch Planet and included an essay at the end of the issue. It provides further insight to the meter of Fraction’s prose and its roots in Greek verse. It’s not necessary reading, but given that this is one of the more unique and difficult aspects of Ody-C, I recommend at least paging through it. I don’t know if this is going to be a regular installment, but it could provide some important historical context, especially if Fraction is merging this narrative with other classic mythologies.

Note: This review was originally published at Women Write About Comics.