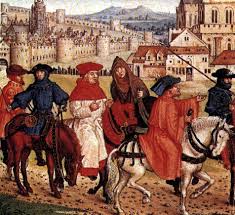 What better way to end the school year but with humor…and I mean dirty humor!  Geoffrey Chaucer wrote the Canterbury Tales as a frame tale (he got the idea from the Decameron and thought it was cool, the rest was history!).  He sets up the frame by telling us about this large group of pilgrims who are travelling from London (Southwark) to the shrine of Thomas a Becket.  Chaucer spends a lot of time in the Prologue of the tales describing the different characters both indirectly and directly so that we get a sense of who these people are and we can figure out the different motives for taking this religious trip.  As this is an “estate satire” or a satire of the different social classes we see that a lot of the clergy are corrupt and many of the poorer people on the trip are actually the better people.  (I know, what a newsflash, right?!?)

Anyways…there’s a lot of different things that you can look at in the Prologue and you can analyze to your heart’s content about what Chaucer’s getting at, or you can just start reading the different tales, avoiding the “boring/moralistic” tales (my take on them) and stick with the fabliau (short, coarse, dirty tales usually involving dark humor).  Of the tales that we tend to read in class:  The Miller’s Tale (a woman in a May/December romance wants to have an affair with her hot tenant.  The two of them concoct an INSANE end of the world, doomsday prepper kind of story to keep her husband John occupied while the two of them make the sweet love.  Enter yet another poor fool who is in love with the beautiful Allison and Three Stooges-like hijinx ensue.  The Reeve’s Tale (The reeve on the trip to Canterbury really really dislikes like the Miller on the trip and so, he includes him in his story and makes him a cuckold in it. By today’s standards, the story’s uncomfortable–I’m not going to go into why because it gives away the major plot line but it gives us a lot to talk about–concerning “dark humor” then and complete inappropriateness today).  Another good story to read (and also puzzle over), is the Wife of Bath’s Prologue and Tale.  It always impresses me that her tale is an anthem of feminism, written by a man in the 1390’s.  That’s the good part about it, the bad part is that there’s a rapist in it and he doesn’t really get “punished” for his actions, in fact, as my students stated, “Um, he did not deserve THAT!”.  And that my friends, is what makes it worthwhile, when your male students seem puzzled that a knight gets rewarded for horrible, horrible behavior, they aren’t happy with the outcome of the story.  It gives me hope.