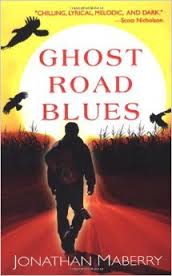 I was languishing in my bed these past two days seemingly dying from some horrendous stomach bug that two of my three urchins brought home. Luckily for me several things happened the other day:  1.  I didn’t die.  2. I read Prisco’s review of a different book by Jonathan Maberry and at the end of the review he gave a shout out to the Pine Deep series.  3. I had a lot of time on my hands because I was quarantined in my bedroom 4. I left all the papers I needed to grade at school for the weekend.  Since I was virtually relieved of all motherly and scholarly duties, all I could possibly do (aside from countless sprints to the bathroom) was read my face off. And read I did. Thanks so much Prisco, this was everything I wanted and needed.

30 years ago Pine Deep suffered from a Black Harvest and a killer on a spree, killing kids.  One man stopped that killer before he could murder two more children, unfortunately for that man, he simply pushed that man’s body into the swamp–and then we learn, evil doesn’t die, it’s gets stronger and it waits.  Flash forward 30 years, it’s another black harvest (all the crops are blighted) and the evil that has been buried all these years is returning.  It’s hardly a coincidence that some very bad men are headed toward Pine Deep, very bad men who can be manipulated for greater evil purposes than perhaps even they thought they were capable of. Between the men who being drawn to the town like moths to flame, there are also townspeople whose minds have been bent and have been fervently waiting for this moment to happen.  Pine Deep has the quirky little moniker of the Spookiest Town in America…but it’s getting spookier and  the scares more visceral as the blood starts flowing and bodies mutilated. A battle between good and evil is being waged, even if the players don’t fully know what they are entrenched in.

What can I say? I loved this book.  I can completely see why Maberry won the Bram Stoker Award for best first novel.  It reminds me of some of the best of Stephen King (think the The Stand and [insert your favorite SK novel that has a large cast and evil in it]), in terms of pacing, the scope of the characters and the sheer evilness of the characters. There are crossovers between human evil and real primordial evil, that add layers of horror.  I’m not afraid of a monster ripping my throat out (that entertains me), but I am truly terrified of the religious zealot character who is killing in the name of his lord (that flat out scares me)…both are represented here and both with insights and clarity that even the unknown and unfathomable are given shape to the reader.  If you like horror and are ready to tear through 400 odd pages at lightning speed–this is the one to do it for ya!